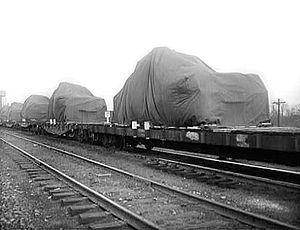 A string of flatcars carries tanks (under tarps) in April, 1943.

A flatcar (US) (also flat car (US)[1] or flat wagon (non-US)) is a piece of railroad (US) or railway (non-US) rolling stock that consists of an open, flat deck on four or six wheels or a pair of trucks (US) or bogies (UK). The deck of the car can be wood or steel, and the sides of the deck can include pockets for stakes or tie-down points to secure loads. Flatcars designed for carrying machinery have sliding chain assemblies recessed in the deck. [2]

Flatcars are used for loads that are too large or cumbersome to load in enclosed cars such as boxcars. They are also often used to transport intermodal containers (shipping containers) or trailers as part of intermodal freight transport shipping.

Aircraft parts were hauled via conventional freight cars beginning in World War II. However, given the ever-increasing size of aircraft assemblies, the "Sky Box" method of shipping parts was developed in the late 1960s specifically to transport parts for the Boeing 747 and other "jumbo" jets of the time. The "Sky Box" consists of a two-piece metal shell that is placed atop a standard flatcar to support and protect wing and tail assemblies and fuselage sections in transit (originally, depressed-center or "fish belly" cars were utilized).

Today, Boeing's 737 aircraft are shipped throughout the United States on special trains, including the fuselage.

Bulkhead flatcars are designed with sturdy end-walls (bulkheads) to prevent loads from shifting past the ends of the car. Loads typically carried are pipe, steel slabs, utility poles and lumber, though lumber is increasingly being hauled by centerbeam cars.

Centerbeam flatcars, centerbeams or center partition railcars[1] are specialty cars designed for carrying bundled building supplies such as dimensional lumber, wallboard, and fence posts. They are essentially bulkhead flatcars that have been reinforced by a longitudinal I-beam, often in the form of a Vierendeel truss, sometimes reinforced by diagonal members. They must be loaded symmetrically, with half of the payload on one side of the centerbeam and half on the other to avoid tipping over.

A heavy duty flatcar with load in Scotch Block, Ontario, on 27 November 2004.

Heavy capacity flatcars are cars designed to carry more than 100 short tons (90.72 t; 89.29 long tons). They often have more than the typical North American standard of four axles (one two axle truck at each end), and may have a depressed center or "fish belly" to handle excess-height loads as well as two trucks of three axles each (one at each end) or four trucks (two at each end) of two axles each, connected by span bolsters. Loads typically handled include electrical power equipment and large industrial production machinery.

Some companies, such as CSX Transportation, have former wood-carrying flatcars rebuilt into platforms which mount remote control equipment for use in operating locomotives. Such platforms are fitted with appropriate headlights, horns, and air brake appliances to operate in the leading position on a cut of cars (i.e. coupled ahead of the locomotive).

A picture of a P&O Nedlloyd intermodal freight flatcar at Banbury station in the year 2001. 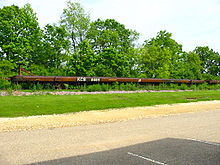 Kansas City Southern Railway #8985, a flatcar seen in this May 29, 2004, photo, is fitted with fifth wheel coupling hitches for hauling trailers.

COFC (container on flat car) cars are typically 89 feet (27 m) long and carry four 20-foot (6.10 m) intermodal containers or two 40-foot (12.19 m)/45-foot (13.72 m) shipping containers (the two 45-foot / 13.72 m containers are carryable due to the fact that the car is actually 92 ft (28 m) long, using the strike plates). With the rise of intermodal freight transport-specific cars, and given the age of most of these flats, numbers will decline over the next several years. Indeed, when the first well cars appeared, allowing double stacking, many container flats were re-built as autoracks. The few "new build" container flats are identifiable by their lack of decking, welded steel frame, and standard 89-foot (27 m) length. One variant is the 50 feet (15 m) car (which usually carries one large container as a load); these are actually re-built old boxcars. Common reporting marks are FEC, CP, SOO and KTTX. The ATTX cars, which feature no spark grips and sides, are built for hauling dangerous goods (ammunition, flammable fluids, etc.).

A center sill and side sill only car with lateral arms to support intermodal containers. No deck.

Similar to the spine car except that it is designed to carry lumber. Center sill and lateral arms only. No deck, sometimes no side sills and sometimes no end sills.[3] [4] [5] [6] [7]

In marine service, the linkspan between a ferry or barge and its dock is very weak. In order to avoid loss of cargo and/or heavy locomotives, an old flatcar (which is usually the lightest car available) is used as a bridge between the locomotive on the dock and the cars on the ferry or barge.

Idler flatcars are also used in oversize freight service, as loads such as pipe often overhang the ends of most standard-sized flatcars. Empty flatcars will be placed on both ends of the loaded car. This protects the cargo ends from damage and ensures that the loaded cars don't bind, and damage the ends of adjacent cars.

Often a flat car is placed directly in front of a crane ("big hook") in order to: