Manoel Cândido Pinto de Oliveira, GCSE (Portuguese pronunciation: [mɐnuˈɛɫ doliˈvɐjɾɐ]; born December 11, 1908) is a Portuguese film director born in Cedofeita, Porto. In March 2008 he was reported to be the oldest active film director in the world[1], and is possibly the second oldest film director ever after George Abbott.

Manoel de Oliveira was born in Porto, Portugal, on December 11, 1908, to Francisco José de Oliveira and Cândida Ferreira Pinto. His family were wealthy industrialists and agricultural landowners.[2] From an early age, Oliveira was interested in the poverty of the lower classes, the arts and especially films. While he has named D. W. Griffith, Eric von Stroheim, Charlie Chaplin, Carl Dreyer's The Passion of Joan of Arc and Sergei Eisenstein's The General Line as early influences, he was also disappointed to have virtually no Portuguese filmmakers to emulate.[3] The Portuguese film industry was also highly censored and restricted under the fascist Salazar regime until the mid-1970s. His later films, such as Belle Toujours (a sequel to Belle du Jour), suggest an affinity with Spanish filmmaker Luis Buñuel.

He attended school in Galicia, Spain, and his goal, as a teenager, was to become an actor. At 17, he joined his brothers as an executive in his father's factories, where he remained for the majority of his adult life when not making films. In his Sight and Sound article from 1981, John Gillett describes Oliveira as having "spent most of his life in business...making films only when circumstances allowed."[3]

His first attempt at filmmaking was at the age of 19 in 1927 when he and his friends worked on a film about the Portuguese experience in World War I, although the film was never made. He enrolled in Italian film-maker Rino Lupo's acting school at age 20, but turned his attention back to filmmaking when he saw Walther Ruttmann's documentary Berlin: Symphony of a City. This prompted him to direct his first film, also a documentary, titled Douro, Faina Fluvial (1931), a portrait of his hometown Porto. Over the next 10 years Oliveira struggled to make films, abandoning several ambitious projects and making a handful of short documentaries.[3]

He has the distinction of having acted in the second Portuguese sound film, A Canção de Lisboa (1933).

His first feature film came much later, in 1942. Aniki-Bóbó, a portrait of Porto's street children, was a commercial failure when it opened, and its merit only came to be recognized over time.[4] This drawback forced Manoel de Oliveira to abandon other film projects he was involved in, and to dedicate himself to running his family vineyard.

In 1955 Oliviera traveled to Germany to study new techniques in color cinematography. He re-emerged onto the film scene in 1956 with The Artist and the City, a twenty six minute documentary short film shot in color. Much like his first film, The Painter and the City is a portrait of Porto, juxtaposing color shots of the city with paintings being created by local artist Antonio Cruz. The film was shown in a number of festivals to positive reviews.[3] In 1959, Portugal's National Federation of Industrial Millers commissioned O Pão, a color documentary on Portugal's bread industry.

In 1963, Rite of Spring (O Acto de Primavera), a partly a documentary depicting an annual passion play, marked a turning point for his career. Oliviera has said that making the film "profoundly altered his conception of cinema" as a tool not to simulate reality, but merely represent it. O Acto de Primavera was called the first political film from Portugal by film critic Henrique Costa and gave Oliviera his first world wide recognition as a filmmaker. The film won the Grand Prix at the Siena Film Festival and Oliviera had his first film retrospective at Locarno in 1964.[3]

This was shortly followed by A caça (The Hunt), a grim, surrealistic short narrative film that contrasted with the happy tones of his previous documentary. Due to violations of censorship laws, Oliveira spent 10 days in jail after the release of this film. [5]Despite the widespread acclaim, he would not return to the director's seat until the 1970s.

Since the 1970s, Oliviera has been at his most active, with the vast majority of his films having been made after his seventy-fifth birthday. Whether a late bloomer or a victim of unfortunate delays, he has become Portugal's preeminent filmmaker. Film critic J. Hoberman has said "at an age when many men think of retirement, Oliviera emerged from obscurity as one of the 70s leading modernists, a peer of Straub, Syberberg and Duras."[3]

With a new found artistic freedom after António de Oliveira Salazar's stroke in 1968 and the April 1974 Carnation Revolution, Oliviera's career began to flourish and receive even more international acclaim. His second return to filmmaking came in 1972 with O Passado e o Presente, a satirical comedy on marriage and class differences. With its lyrical surrealism and farcical situations, the film was a shift from his earlier work which was exclusively about lower class people to films dealing with the bourgeoisie. This film was the first of a trilogy of "frustrated loves", followed by Benilde ou a Virgem Mãe in 1975 and Amor de Perdição in 1978, based on the novel by Camilo Castelo Branco.

In 1981 Oliviera made Francisca, based on the novel by Agustina Bessa Luis. The film is a tragic love triangle detailing a real life relationship between an Fanny Owen, Amor de Perdição author Camilo Castelo Branco and Branco's best friend Jose Augusto. Oliviera's wife was a distant relative of Owen and had access to private letter's written by all three protagonists in the film. The film was screened to great acclaim at the Director's Fortnight at the 1981 Cannes Film Festival and furthered Oliviera's global recognition.[3] In addition to Francisca, Oliviera has adapted six other novels or stories from author Augustina Bessa Luis, as well as collaborated on the screenplay for the documentary Visita ou Memórias e Confissões.

Following the success of Francisca, Oliviera made three documentary films. Visita ou Memórias e Confissões is a autobiographical documentary about Oliviera's family history. After completing the film, he has decided that it will not be released until after his death. He then made Lisboa Cultural and Nice... À Propos de Jean Vigo , a documentary for French television on the city of Nice, and also a tribute to French filmmaker Jean Vigo. 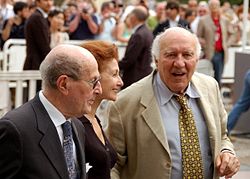 Oliveira and Michel Piccoli at the 2001 Cannes Film festival

Oliviera then made his most ambitious film to that date, Le Soulier de Satin, based on the play by Paul Claudel. The seven hour film took Oliviera two years to complete and was screened at the 1985 Cannes Film Festival and the 1985 Venice Film Festival, where Oliviera received a special Golden Lion for his career.[3] Oliviera opened the 1986 Venice Film Festival with Mon Cas, based on the play by Jose Regio and finished out the decade with the critically acclaimed Os Canibais.

Since 1990 (when he turned 82), he has made an average of one film per year. He has worked with such actors as Luís Miguel Cintra, John Malkovich, Catherine Deneuve, Michel Piccoli, Jeanne Moreau, Chiara Mastroianni, and Marcello Mastroianni in the actor's last film. His 2007 film Christopher Columbus - the Enigma was shot partly in New York. His 2010 film The Strange Case of Angelica was entered into the Un Certain Regard section of the 2010 Cannes Film Festival.[6]

Manoel de Oliveira has said that he directs movies for the sheer pleasure of it, regardless of critical reaction. He maintains a quiet life away from the spotlights.

In 2008, Oliveira was awarded a doctorate degree honoris causa by the University of the Algarve.[7] He has also been awarded the Order of St. James of the Sword by the President of Portugal. In addition, he has received multiple honours such as those of the Cannes, Venice and Montréal film festivals. He has been awarded two Career Golden Lions, in 1985 and 2004, and a Golden Palm for his lifetime achievements in 2008.

Manoel de Oliveira is not only a film director. He also competed as a race car driver in his younger days. In the 1937 Grand Prix season he competed in and won the International Estoril Circuit race, driving a Ford V8 Special.[8]

Manoel de Oliveira was chosen to give the welcoming speech at Pope Benedict XVI's meeting with representatives of the Portuguese cultural world on 12 May 2010 at the Belém Cultural Center. In the speech, titled "Religion and Art", he said that morality and art may well have derived from the religious attempt at "a explanation of the existence of human beings" with regard to their "concrete insertion in the Cosmos". The arts "have always been strictly linked to religions" and Christianity has been "prodigal in artistic expressions".[9] In an interview published the day before, Oliveira, who was raised a Catholic, said that, "doubts or not, the religious aspect of life has always accompanied me," and added, "All my films are religious."[10]