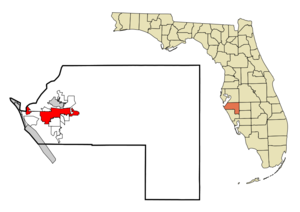 mapsize = 250x200px
map_caption = Location in Manatee County and the state of

Originally discovered by Hernando De Soto at in 1539, the city took the name of Dr. Joseph Braden, whose nearby fortlike house was a refuge for early settlers during Indian attacks. The current city of Bradenton was formed in 1943, when the Florida legislature merged the cities of Manatee (incorporated in 1888) and Bradentown (incorporated in 1903).

Bradenton is located on US 41 between and . The area is surrounded by s, both fresh and saltwater. Along the and into are over 20 miles of Florida beaches - many which are shaded by Australian pines. Bordered on the north by the Manatee River, Bradenton is located on the mainland and is separated from the outer s of and Longboat Key by the . located on the north end of Anna Maria island is a park overlooking Tampa Bay. The business district and community of on the southern end of Anna Maria island is oriented toward vacationers who come to enjoy the surrounding beaches. Longboat Key, the next barrier island south, is popular with shell hunters along its beaches.Facts|date=August 2008

Downtown Bradenton is located on the west side of the city. Home to many of Bradenton's offices and government buildings, it is a lively place with new buildings currently under construction. The tallest is the , 12 stories high, with its trademark blue-green windows. It is currently owned by BFC Joint Ventures. Employee Leasing Solutions lease office space and the sign on top of the building. Next tallest is the brand new Manatee County Judicial Center with eight floors, located next to the historic courthouse.Facts|date=August 2008

The Eastern side of Bradenton is growing at a rapid rate. Initially starting as the popular subdivision , it is now becoming a heavily populated part of town. Most of the buildings are newer than that of West Bradenton.Facts|date=December 2007

is one of the world's largest producers and marketers of orange juice. Founded in 1947 by , an Italian immigrant, it has grown to over 8,000 employees in 2004, and has markets its products throughout the . It has been owned by , Inc. since 1998. Tropicana has entered a business deal with to haul their famous juice trains, a relationship in effect since 1971. In 2003, Tropicana's corporate headquarters were relocated to when PepsiCo consolidated their beverage business after the acquisition of , but their juice production still remains in Bradenton. , a nationwide sports-apparel chain, is headquartered in Bradenton, as is department store chain Bealls. Bradenton has been hit considerably hard by the , as reported by , projecting a 24.8% loss in median home values by the third quarter of 2008. [http://money.cnn.com/2007/09/19/real_estate/steep_home_price_drops_coming/index.htm?cnn=yes]

Bradenton is served by in nearby and is connected to by the . The Sunshine Skyway is a convert|5.5|mi|km|1|sing=on cross-bay bridge that rises convert|250|ft|m|0 above the bay at its highest point. Remnants of the old Skyway bridge have been converted into a fishing pier extending into Tampa Bay from both sides of the bay.

Bradenton's Riverfront Theatre has a three-year record of first-place wins within the and the competitions. In addition, the theatre currently holds the first place title from the competition.

Located on the in downtown Bradenton is the , and . This one-stop museum-planetarium-aquarium offers a glimpse of Florida history, a star and laser show, and viewing of and other live s.

Bradenton also is home to the [http://www.artistsguildofmanatee.org/] , a neighborhood immediately south of downtown where special zoning laws allow residents to live and work in their homes. As a result, about 50 of these once dilapidated houses have been converted into studios, galleries, small restaurants and other small businesses, mostly catering to the arts. The Village of the Arts prides itself as the largest arts district on the Gulf Coast.

Because of the Village of the Arts, the City of Bradenton was recently recognized as one of the Top 10 cities in the country for working artists by , a business magazine for visual artists. [ [http://www.artcalendar.com/article.asp?ID=70 10 Great Towns for Working Artists] ]