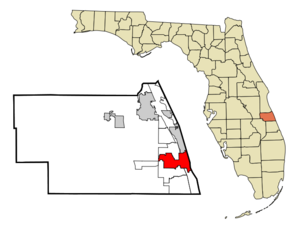 The city is divided by the into the mainland on one side and the oceanfront barrier island on the other. The island's population consists of wealthy vacation dwellers and well-to-do year-round residents. Restrictive zoning has allowed the island to repel attempts to develop high-rise hotels and large commercial centers, so it maintains a quiet, residential atmosphere.

According to the , is at the eastern end of a demarcation line that separates Florida's climate into two zones, to the north of the town has a and a to the south. From , this line stretches straight across the state, with on the western end of the demarcation line.Fact|date=March 2008

There were 8,516 households out of which 17.5% had children under the age of 18 living with them, 44.4% were married couples living together, 8.6% had a female householder with no husband present, and 43.9% were non-families. 36.4% of all households were made up of individuals and 16.6% had someone living alone who was 65 years of age or older. The average household size was 2.02 and the average family size was 2.59.

is located 1 mile northwest of the .

Vero Beach is home to general aviation manufacturer Piper Aircraft [http://piper.com] , which is the largest private employer in Indian River County. Aside from Piper, the bulk of commercial activity in Vero Beach centers around Tourism, particularly in the high season months of December through April; the Citrus Industry (Vero Beach is well-known for Indian River Grapefruit); and professional and service activities, particularly those catering the area's large senior citizen population.

The Florida East Coast Railway's mainline bisects Vero Beach. The old passenger depot was relocated next to the trackage to its current location, though there is no regularly scheduled passenger service to Vero Beach at present, but serves as a museum. FEC serves a local lumber/building materials customer in Vero Beach itself that receives boxcars and flatcars, and a sand/aggregate customer just to the north of Vero that receives hopper cars, including FEC's signature Ortner aggregate hoppers. These are visible to railfans when they travel on the roadway that parallels the FEC right-of-way. Most FEC trains, and NS run-throughs with trackage rights, pass through Vero under cover of darkness. FEC is fully-CTC, and extremely well-maintained. Indeed, employment with FEC is one of the most coveted railroad industry jobs in the South-east United States. Just to the north of Vero, in the vicinity of the sand/aggregate customer, the now-disconnected spurs that once served citrus-packing companies in the area can be seen. These companies now ship their product by truck. It is unknown, at present, if FEC intends to try to recapture this business by reconnecting the various spurs and offering regular local service that can move the product to market faster.Facts|date=November 2007

The Indian River Lagoon, passing through Vero Beach, forms a significant portion of the Intracoastal Waterway, and is a hub for boating, fishing, water skiing, and other small-craft waterborne activities. Sheltered from the open ocean, the Indian River area of Vero has a number of public and private marinas and boat launch facilities.

* Driftwood Inn - located in Vero's central beach business district, it is a historic hotel constructed in the early 20th Century by the late local eccentric and explorer . This facility was originally built entirely from pieces of driftwood and other antiques. Sexton also designed the "Hall of Giants" at McKee Jungle Gardens.
*
*
*
*
* McKee Jungle Gardens - visit periodic exhibitions ranging from plant and flower shows to dinosaur displays
*
*
*
*
*
*
*
*
*

The city includes several parks, most notably Riverside Park, which is the location of Riverside Theater and the .

Vero Beach was the site of a major archaeological discovery by local resident Frank Ayers in 1915. Known as the 'Vero Man', the find created an international controversy for it provided the first evidence that human beings had inhabited the '' prior to the end of the (c. 10,000 BCE). Over the next thirty years, the remains were shuffled back and forth between the and the Florida State Museum of History in . Experts could never reach an agreement and the remains were eventually lost just prior to the invention of in 1947. Interest in Vero Man gradually waned, though more recently there was some renewed interest in finding the remains.