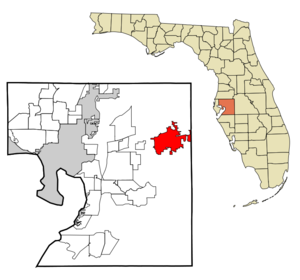 mapsize = 250x200px
map_caption = Location in Hillsborough County and the state of

Many people believe it was named for the flora (especially s and s, as well as s) grown at plant nurseries in its tropical . However, it was named after prominent developer, (see ).

Plant City is known as the winter capital of the world, and hosts the annual in the late winter (usually in February or early March), which is attended by people from all over the United States as well as many people from around the world.

Plant City's original name was Ichepucksassa (also known as Idasukshed) after the Indian village that once occupied the territory. Its name caused so much confusion that the city was renamed Cork, after the postmaster's Irish hometown. It was finally given the name Plant City in commemoration of Henry B. Plant, and his railroad, which significantly boosted the commerce in this primarily agricultural community by incorporating it with the .

Originally, Plant City was a large center, but after changing its primary crop to strawberries it gained recognition as the winter strawberry capital of the world.

The city and its surrounding area are in the Southern Flatwoods section as defined by the USDA. [http://www.mo15.nrcs.usda.gov/technical/mlra_fl.html] The section as a whole is noted for its sandy, infertile, poorly drained soils. In and around Plant City, however, high organic matter content and scattered nodules make many of the soils more fertile than typical for the flatwoods. [http://websoilsurvey.nrcs.usda.gov/app/WebSoilSurvey.aspx]

There were 10,849 households out of which 36.9% had children under the age of 18 living with them, 52.7% were married couples living together, 14.8% had a female householder with no husband present, and 27.7% were non-families. 22.9% of all households were made up of individuals and 9.3% had someone living alone who was 65 years of age or older. The average household size was 2.73 and the average family size was 3.20.

is a public-use located convert|2|mi|km southwest of the .

There are several locations in Plant City which have been included in the . They are: