The Great Western Railway 3200 Class (or 'Earl' Class) was a design of 4-4-0 steam locomotive for passenger train work. The nickname for this class was Dukedog since the locomotives were composed of former Duke Class boilers on Bulldog Class frames. As such they were one of the last steam locomotive classes to retain outside frames.

The first, prototype, conversion retained its Duke number and name (3265 Tre Pol and Pen), but the others took new numbers in the 32xx series (3200-3228) and were given the names of Earls. These names were removed in 1937 and re-applied to Castle Class locomotives. All these locomotives were renumbered 90xx in 1946 upon delivery of new 2251 Class engines.

These locomotives were in regular use on the Cambrian Line in the 1950s. They were one of the few classes light enough to be permitted on the wooden Barmouth Bridge; others were the GWR 2251 Class and the LMS Ivatt Class 2 2-6-0. 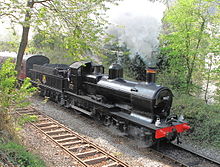 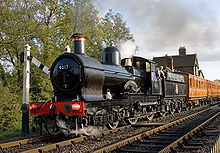 One locomotive, No. 9017 Earl of Berkeley, survives in preservation at the Bluebell Railway where it is currently not in operation despite its overhaul in 2003. This is due to damage in the boiler which is currently too costly to repair.

NB: In the table below, names in parentheses were allocated but never actually carried in GWR/BR service.