The following is a list of county routes in Sullivan County, New York, in the United States. The county highway system, maintained by the Sullivan County highway department, is composed of roughly 140 routes arranged across the county in groups of nine. For the most part, state routes in Sullivan County are county-maintained and co-signed with county routes. However, the converse is not true; that is, not all county routes overlap state routes for their entire length. Typically, each series consists of county routes along a single roadway, often overlapping with state highways in the process. The lowest numbered route in the system is 11; the highest is 183C. Note that routes 160 through 169 do not conform to any style, and coincidentally the 170 through 179 series (with the exception of the spur designated 174A) follows the pre-expressway routing of New York State Route 17.

The Barryville to Claryville series encompasses county routes 11 through 17 and 19, the non-suffixed of which form a continuous roadway between the two communities, passing through Liberty in between. Most of the routes are concurrent to New York State Route 55, which follows the Barryville-Claryville route from Barryville north to Curry. At Curry, CR 19 splits from NY 55 to access Claryville.

The lone suffixed route in the series, CR 11A, is a spur to New York State Route 97 from CR 11 in Barryville.

The Barryville to Narrowsburg series encompasses county routes 21 through 26. County routes 21 through 23 form a continuous roadway north to an intersection with NY 97 near Narrowsburg. After a portion of roadway solely occupied by NY 97, then NY 52/NY 97, CR 24 begins at the western terminus of the NY 52/NY 97 overlap and runs concurrent to NY 52 to the Pennsylvania state line.

CR 47 is a spur off CR 32 from Eldred to Highland Lake. The route itself does not connect to any other route in the Pond Eddy-Monticello series; however, the unnumbered Mohican Lake Road continues east from the eastern terminus of CR 47 to intersect CR 42 near Glen Spey. CR 48 and CR 49 are designations for a connector that joins CR 43 and CR 44 in Fowlerville to Orange CR 7. CR 48 spans the segment from Fowlerville to CR 101; CR 49 covers the portion from CR 101 to the Orange County line. CR 45A is a short alternate route between CR 45 and NY 42 near Monticello.

The Liberty to Spring Glen series consists of county routes 51 through 59. County routes 51 through 55 follow a single roadway across eastern Sullivan County from Liberty to the Ulster County line, with a brief gap between CR 53 and CR 54 in Woodridge. In Ulster County, the road continues as the short CR 80, terminating at U.S. Route 209 in Spring Glen.

The New Vernon to Burlingham series, consists of routes 61–65. CR 62 (Winterton Road) runs from the Orange County line near New Vernon, to Bloomingburg, where it is also known as South Road within the village limits. CR 65 (Upper Road) runs west from an intersection with CR 62 then south (Mountain Road) to the Orange County line heading towards Otisville, New York where it continues as Orange County CR 90 (Old Mountain Road). CR 61 (Buttonwood Road) runs from an intersection with CR 62 west and then south (Skylark Road) to connect back to CR 65. CR 63 (Campbell Road) runs east from an intersection with CR 62, then turns back west (Bronner Road) to reconnect to CR 62. A now closed bridge across the Shawangunk Kill used to connect to Hubbard Road in Orange County. CR 61 runs from Bloomingburg, where it begins as North Road, then becomes Burlingham Road outside the village limit, to the Ulster County line, where it continues as Ulster County CR 7 to NY Route 52.

The route from Mongaup Valley to Liberty consists of the 70 series. Routes 71–73 consist of one roadway. The 71 portion is called Ferndale Road, while the 72–73 portion is known as Lt. J.G. Brender Highway. Between them, they run from NY 55/CR 15, to Crumley Road, a local road. CR's 74 and 75 conform, but are not connected to each other. 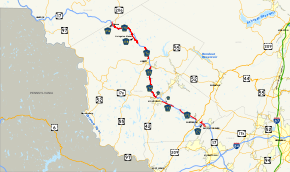 The Roscoe to Bloomingburg series is made up of county routes 171 through 176, 178, and 179, plus three spur routes. All eight mainline routes are mostly continuous and collectively extend from the Delaware County line northwest of Roscoe to the Bloomingburg village line just west of the Orange County line. In between, the route serves Liberty, Monticello, and Wurtsboro via locally-maintained highways as the county designations end at the village limits. The series parallels the New York State Route 17 expressway for its entire length and also runs along the southern boundary of Catskill Park from Livingston Manor to the Delaware County line. The designations are split as follows, in numerical order and in southeast–northwest progression: