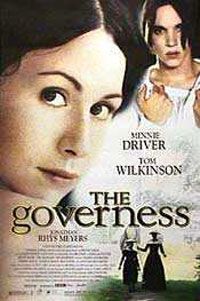 The Governess is a 1998 British period written and directed by Sandra Goldbacher. The focuses on a young ish woman who reinvents herself as a when she is forced to find work to support her family.

Set in the 1830s, the story centers on Rosina da Silva, the sophisticated elder daughter in a wealthy Jewish family living in . When her father is murdered on the street and leaves behind numerous debts, she forsakes an arranged marriage to an older suitor, transforms herself into Mary Blackchurch - a of partial Italian descent - in order to conceal her heritage, and accepts a position as a governess for a Scottish family living on the Isle of Skye in the . Patriarch Charles Cavendish is a man of science intent on solving the problem of retaining a photographic image on paper, while his wife flounders in a sea of ennui. Their young daughter Clementina initially resists Mary's discipline, but eventually finds in her a friend and companion.

Mary, well-educated and unusually curious for a female in an era when a woman's primary focus is keeping house and attending to the needs of her family, surprises Charles with the depth of her interest in his work and becomes his assistant. The admiration he feels for the young woman soon turns into a passion that is reciprocated by Mary, but eventually he finds himself torn between his feelings for her and his dedication to his work.

Complications ensue when Henry Cavendish returns home after being expelled from for smoking and becomes obsessed with Mary. While searching through her belongings, he uncovers evidence of her background, and although he confesses to her he knows about her past, he promises to keep it their secret.

Charles discovers a nude photograph of himself Mary took while he was asleep following a session of lovemaking in his laboratory, and he begins to shun her, going so far as to claim credit for a technique she discovered when a fellow scientist visits. Angered by his rebuff and betrayal, Mary leaves the island and returns to London, but not before presenting Mrs. Cavendish with the picture of her naked husband. Once home, she reverts to her true identity and becomes a photographer noted for her distinct images of Jewish people.

The film was shot on location at in , in , and London. Interiors were filmed at the in .

For the , composer relied on the , , s, ethnic s, , , and Eastern s to imitate Sephardi melodies of the era. Songs were performed in Ladino by . The soundtrack also includes "Standchen," a serenade for violin and piano by .

The film debuted at the before going into limited release in the US. On its opening weekend it grossed $57,799 in six theaters. Its total box office in the US was $3,719,509 [ [http://www.boxofficemojo.com/movies/?id=thegoverness.htm "The Governess" at BoxOfficeMojo.com] ] .

In his review in the "", Stephen Holden called the film "ravishingly handsome" and added, "The Governess" is a wonderful showcase for Ms. Driver . . . If [her] performance is strong, it is less than great, because her face lacks the transparency of expression that would transport us inside her character's mind . . . The movie takes some missteps. Rosina's ability to support her family in luxurious style from her earnings as a governess is implausible. The screenplay includes some glaring lapses into contemporary . And dramatically, the movie peters out in its disappointingly perfunctory final scenes. But [it] still leaves a lasting after-image." [ [http://www.nytimes.com/library/film/073198gov-film-review.html "New York Times" review] ]

Ruthe Stein of the "" said, "As Rosina's extraordinary fate unfolds in "The Governess", the real wonder becomes how British filmmaker Sandra Goldbacher was able to write and direct such an accomplished, touching and original movie her first time out . . . Rosina is a wonderfully rich role, and Driver gives it everything she has. It's her best work yet." [ [http://www.sfgate.com/cgi-bin/article.cgi?f=/c/a/1998/08/07/DD21350.DTL "San Francisco Chronicle" review] ]

In "Variety", Ken Eisner called the film "beautifully crafted" and said it "gets high marks for originality and style," then added, "Although first-time helmer Sandra Goldbacher, working from her own script, has come up with a fascinating premise, her follow-through is too scattered in concept and monotonous in execution to be truly rewarding . . . [It] has much to offer the senses . . . but the images are often art-directed to death, with more attention paid to fabrics, textures and colors than to narrative coherence. A little trimming could remove some of the distractions and repetition, but it won't be easy to hide the movie's lack of a solid point or payoff." [ [http://www.variety.com/review/VE1117913008.html?categoryid=31&cs=1&p=0 "Variety" review] ]

Barbara Shulgasser of the "" observed, "Sandra Goldbacher, writing and directing her first feature, is a sure-handed filmmaker. The movie is a tableau of sensuality. The tactile attractiveness of the photographic images meld with the fire that devours the lovers . . . I found the end of the movie a bit of an anticlimax and sense that Goldbacher just ran out of steam. But it seems a sure bet that she has many more movies ahead of her, all of which I look forward to seeing." [ [http://www.sfgate.com/cgi-bin/article.cgi?f=/e/a/1998/08/07/WEEKEND10440.dtl "San Francisco Examiner" review] ]

In "", Owen Gleiberman graded the film C and called it "a have-your--and-eat-it-too princess fantasy. Writer-director Sandra Goldbacher glorifies her heroine at every turn, but she also fills the movie with arid pauses, turning it into a claustrophobic study in repression." [ [http://www.ew.com/ew/article/0,,284380,00.html "Entertainment Weekly" review] ]

Ashley Rowe won the Evening Standard British Film Award for Best Technical/Artistic Achievement for his cinematography. Sandra Goldbacher was nominated for the Crystal Globe and won both the Audience Award and Special Prize at the .