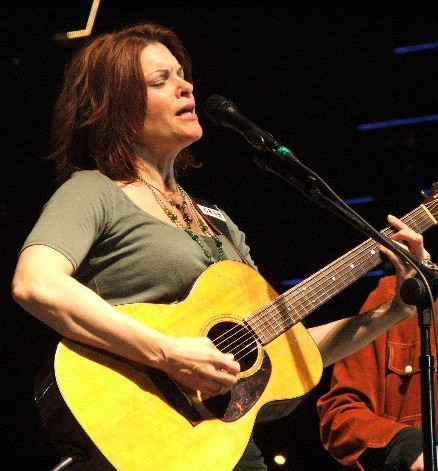 Rosanne Cash (born , ) is an American and occasional , who is known for her string of Top 10 country hit singles in the 1980s. She is also known as one of the daughters of country music singer, and his first wife Vivian Liberto Cash Distin.

Although she is classified as a country singer, Cash blends the elements of Rock, Blues, Pop, and Folk into her music. This type of the blending could be seen Cash's most popular albums and singles, including "Seven Year Ache" (and an album of the same name), "", "", "Interiors", and the "". She acquired eleven #1 hit singles on the Billboard Country Chart during the 1980s, as well as four additional Top 10 hits.

Rosanne Cash was born in , in 1955, around the time when her father's career was beginning. After her parents separated in the 1960s, Cash was raised by her mother, Vivian, in Southern .

She recorded her self-titled debut album for Ariola in 1978, but it was never released in the United States.

She released her American debut album, "Right or Wrong" in 1979. The album produced two Top 20 hit singles. The first single, "No Memories Hangin' Around" was a duet with country singer, , followed by "Couldn't Do Nothin' Right," both of which were written by Rodney Crowell.

Cash released her second album, "" in 1981, and was considered her commercial breakthrough. The title track peaked at #1 on the Billboard Country Chart, and also crossed over to the Billboard Pop Chart, peaking at #22.

Her fifth studio album was 1987's "", which featured Rodney Crowell as the producer of the album again. The album also gained critical acclaim for its return to traditional country music. The album spawned four #1 hits between 1987 in 1988, including a cover version of her father's "Tennessee Flat Top Box,"

In 1988, Cash recorded a duet with her husband titled, "", which was released only on Crowell's "" album, and peaked at #1 on the Billboard Country Chart the same year. Also in 1988, Cash was awarded ""'s "Top Singles Artist."

In 1989, Cash released a compilation album of her hit singles from the 1980s. Included were two new songs that were released as singles, beginning with a cover version of ' "," which peaked at #1 in 1989 and became Cash's eleventh and final #1 hit.

In 1990, Cash returned with her first studio album in nearly three years with "Interiors." It became the first album released by Cash to be produced by herself and received a Grammy award nomination for "."

After signing with , she released her first studio album in three years, "" in 1996, which was composed of ten new songs, with nearly no studio sound effects.

In 1996, Cash released a book of short stories entitled "Bodies of Water".

In 2003, Cash released "" also under Capitol, her first studio album since 1996. The album took nearly five years to make.

In 2005, she was portrayed by in the -winning biopic based on her father's life, "," for which her half-brother -- the only child of June Carter and Johnny Cash -- was the executive producer. Cash's name was incorrectly spelled in the credits as "Roseanne".

Cash plans on recording a new album, after making plans of going back into the recording studio in 2008, as well as returning to touring.

Cash married her first husband, country music singer-songwriter, in 1979. Their union produced three daughters: Caitlin, Chelsea and Carrie. They divorced in 1992. She married her second husband, in 1995, and together they have one son, Jakob.

Cash's father married in the 1950s and then they divorced in the 1960s. He then married in the mid-1960s. June Carter's daughter, , also a country singer who had success in the early 1990s, became Cash's stepsister.

On , , it was announced on her official website that Cash would undergo in for a rare condition. She was diagnosed with Chiari I malformation, a congenital malformation of the skull that affects the brain and . The surgery did not consist of removing a tumor. That year, she cancelled her final tour dates for her "Black Cadillac" tour. [ [http://www.cmt.com/news/news-in-brief/1573619/rosanne-cash-to-undergo-brain-surgery.jhtml Rosanne Cash to Undergo Brain Surgery] "Country Music Television News & Updates"; retrieved 7-13-08.] She underwent the surgery November 27 at the in . Record executives at her label, said that a full recovery from the surgery is expected. [ [http://www.cmt.com/news/news-in-brief/1576482/rosanne-cash-recuperating-from-brain-surgery.jhtml Rosanne Cash Recuperating From Brain Surgery] "Country Music Television & Updates"; retrieved 7-13-08.]

Rosanne Cash has been actively involved in promoting since her father's passing in 2003. In 2004, she accepted the Children's Champion Award given by SOS on behalf of her father for the Cash family's support of SOS Children's Villages. [cite web |url=http://www.sos-usa.org/cgi-bin/sos/jsp/retrieve.do?site=US&hNav=show&nav=6.5&cat=/654_friends_worldwide&fn=6542_roseannecash_enus SOS | author= | publisher= | title=Rosanne Cash accepts award from Children's Charity| accessdate=2007-06-29] .