Peter May
For other people named Peter May, see Peter May (disambiguation).

Peter Barker Howard May, CBE (31 December 1929[1] – 27 December 1994) was an English amateur cricketer, who played for Surrey, Cambridge University and England. On 9 July 2009, May was posthumously inducted into the ICC Cricket Hall of Fame.[2]

Born in Reading, Berkshire, he was educated at Charterhouse and Pembroke College, Cambridge, and at both he was regarded as a batting prodigy. Across the 1950s, he was the most consistent and prolific English batsman in both county (representing Surrey) and Test cricket. He made his Test match debut against the South Africans at Headingley in 1951, scoring 138, and was then a regular England player until forced out by illness at the end of the 1950s.[1] May was one of the Wisden Cricketers of the Year in 1952. May was the natural successor to Leonard Hutton as England captain after the successful defence of the Ashes on the 1954/55 tour of Australia. 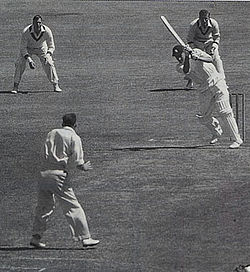 May enjoyed a largely successful captaincy of both his county and country. Surrey had been County Champions for seven years running, with May the captain for the last two seasons, and until 1958 England was never defeated under his leadership. He had beaten South Africa 3-2 in 1955, considered by many to have been the most exciting Test series since the war, Australia 2-1 in 1956, the West Indies 3-0 in 1957 and New Zealand 4-0 in 1958. He was widely regarded as the best post-war batsman England produced, tall, strong and disciplined with a near-perfect technique, a straight bat and a complete range of strokes.[3][4][5] His standards improved with the responsibilities of captaincy and his Test average as captain was 54.03.[6] His greatest century[citation needed] was against the West Indies in 1957 when England followed on 288 runs behind at Edgbaston, he made 285 not out,[7] the highest score by an England captain until Graham Gooch's 333 in 1990,[8] adding 411 with Colin Cowdrey (154) - still an England record for any wicket - and destroyed the mesmerizing hold the spinner Sonny Ramadhin had over English batsmen. In the low scoring Ashes series of 1956 he had made 453 runs (90.60) and was out only once for less than 50, when he made 43. Although himself a highly educated amateur and a gentleman he realised that the old class divisions in English cricket were breaking down and under Len Hutton's leadership the amateur and professional had merged. He enjoyed the complete loyalty of the team and the selectors and was ready to help his players and smooth down feathers.[9] As a captain he was a strict team disciplinarian who expected high standards, he was ruthless when the occasion demanded, but could be inflexible and unimaginative and lacked the charisma of a natural leader.[4][5][10] In 1958-59 he played too defensively and surrendered the initiative too readily to Richie Benaud and he concentrated on saving runs instead of trying to get batsmen out. Faced with Ian Meckiff's questionable bowling[citation needed] in the disastrous First Test he declined to make an official complaint as it would appear unsporting. After the Australian tour May beat New Zealand 1-0, India 5-0 and led England to its first series victory in the West Indies 1-0. He lost 2-1 to the 1961 Australians and retired due to ill-health having been captain in a then record 41 Tests (20 wins, 10 defeats and 11 draws), Benaud being the only man to defeat him in a Test series. He retired entirely from first-class cricket in 1963, taking up a post in the City.[1]

May succeeded Alec Bedser as Chairman of the England cricket selectors in 1982 and held the post for seven years, including presiding over the notorious 1988 Summer of four captains. The reappointment of David Gower as captain for the disastrous 1989 Ashes series was widely seen as a mistake and precipitated May's departure from the role.[1] He served as President of the Marylebone Cricket Club and posthumously as President of Surrey CCC from 1995 to 1996.

He married Virginia Gilligan, a daughter of the former England captain Harold Gilligan and they had four daughters. May died at Liphook, Hampshire, from a brain tumour on the 27 December 1994, four days before what would have been his 65th birthday. 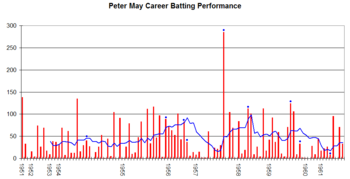