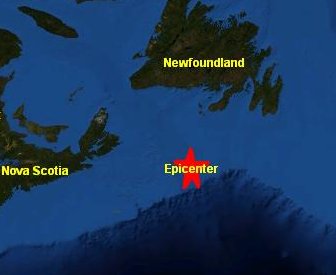 The 1929 Grand Banks earthquake, also called the Laurentian Slope earthquake and the South Shore Disaster, was a magnitude 7.2 that occurred on , in the Atlantic Ocean off the south coast of Newfoundland.

The earthquake was centered on the edge of the , about convert|400|km|mi|abbr=off south of the island. It was felt as far away as New York and Montreal. The quake, along two faults convert|250|km|mi|abbr=off south of the , triggered a large submarine landslide (convert|200|km3|cumi|abbr=on|disp=/). It snapped 12 submarine s and led to a that arrived in three waves, each up to fifteen metres high, that struck the coast at convert|105|km/h|mph|abbr=on about three hours after the earthquake occurred. The waves travelled at speeds up to convert|129|km/h|mph|abbr=on at the ; they were recorded as far away as Portugal.

The tsunami destroyed many south coastal communities on the Burin Peninsula, killing 28 people and leaving 10,000 more homeless. All means of communication were cut off by the destruction, and relief efforts were further hampered by a blizzard that struck the day after. It took more than three days before the "SS Meigle" responded to an SOS signal with doctors, nurses, blankets, and food. Donations from across Newfoundland, Canada, the United States and United Kingdom totalled $250,000.

As of 2008, it is the only recorded tsunami to have struck Canada's east coast.