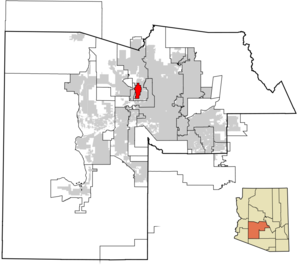 Sun City is a and unincorporated town in Maricopa County, , . The population was 38,309 at the 2000 census. Its adjoining sister city is Sun City West both of which are retirement communities often for snowbirds.

There were 23,490 households out of which 0.3% had children under the age of 18 living with them, 49.5% were married couples living together, 3.0% had a female householder with no husband present, and 46.7% were non-families. 44.1% of all households were made up of individuals and 39.4% had someone living alone who was 65 years of age or older. The average household size was 1.60 and the average family size was 2.07.

Sun City started construction in the 1960s as a community. Del Webb is a group that constructs retirement communities in the . Sun City has a planned street network, but disrupts the secondary street layout of Phoenix. Little has changed for the community in the last 40 years. However, as more retired to the area, Del Webb began construction on in the late-1970s, in the late-1990s, and Sun City Anthem in 1999 and Sun City Festival in July of 2006.

Although independent audits have shown that the community would receive more efficient delivery of services at an ultimately lower cost by incorporation, the issue is adamantly opposed by many outspoken critics.Who|date=November 2007