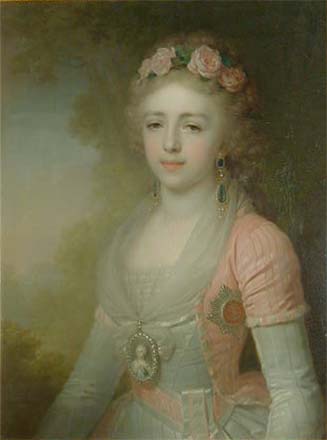 Grand Duchess Alexandra Pavlovna of Russia, ( _ru. Александра Павловна: &ndash; in ) was a daughter of Tsar and sister of Emperors Alexander I and Nicholas I. She became Archduchess of Austria upon her marriage to Archduke Joseph of Austria, Governor of Hungary.

Grand Duchess Alexandra Pavlovna was the third child and eldest daughter of Tsar and his second wife . She received the usual education of Russian princesses and was taught French and German as well as music and drawing. Alexandra was very close with her younger sister Elena, and they were often painted together.

In 1796, Alexandra's grandmother, the Russian Empress Catherine II, considered the then 18-year-old King Gustav IV of Sweden as a possible husband for Alexandra (who was 13-years-old) in order to make it possible to solve many political problems between Russia and Sweden. Catherine liked the young king very much because he was said to have "a very pleasing face, in which wit and charm were portrayed". Alexandra, on the other hand, was described by contemporaries as "the prettiest, sweetest and most innocent of the available princesses in Europe".

Negotiations for the marriage soon started. When the King of Sweden arrived in Russia in August 1796, he and Alexandra fell in love at first sight. He was charmed by her naivete, and he soon went straight to the Empress Catherine to declare his love for Alexandra and asked for her hand. The Empress burst with joy. With all this merriment, Catherine had seemed to overlook the matter of religion: as Queen of Sweden, Alexandra would have to convert from her Russian Orthodox faith to Lutheranism. But Catherine considered that Gustav had implicitly agreed to that when he told Alexandra that he loved her. For two more weeks there were negotiations trying to get to an agreement, but finally the king of Sweden left without a bride. This rebuke shortened Catherine's life who died of a stroke less than two months after the marriage negotiations.

It was decided that their betrothal would be on September 11. On that very day, before taking their vows, Gustav found out in the engagement contract that Alexandra would keep her Orthodox faith even after marrying. He was not aware of this and so the young king exploded, declared that a trap had been laid for him, and swore that he would never agree to give his people an Orthodox queen. He never appeared in their betrothal ceremony and Alexandra was completely grief-stricken. Gustav would later marry Princess , a younger sister of Alexandra's sister-in-law, Elizaveta Alexeievna.

In 1799, three years after the death of Empress Catherine, Tsar Paul decided to join Austria and Prussia in a coalition against the rising power of the French Republic. To cement the alliance, Alexandra was married to Archduke Joseph of Austria, a younger brother of the Emperor Franz II. Archduke Joseph had been made Palatine (Governor) of Hungary. The wedding took place on October 30, 1799 in St Petersburg. The young couple settled in the castle of Alcsút in Hungary.

Alexandra's life in the Austrian court was unhappy. Empress Maria Theresa, the second wife of Emperor Franz II, was jealous of Alexandra's rare beauty and her fine jewels. Not only that, Alexandra very closely resembles the emperor's first wife, Elizabeth of Wurttemberg, who was Alexandra's maternal aunt. Furthermore, her Orthodox faith drew her the hostility of Roman Catholic Austrian court.

A year and a half later, Alexandra died in Vienna on of shortly after giving birth to a daughter, who died on the day of her birth. She was only 17 years old. The Austrian Court refused for her to be buried in the Catholic cemetery; her coffin remained in the basement until the Russian government had it buried in Hungary. Archduke Joseph built a mauseleom dedicate to his wife. Alexandra's death occurred on the same week of her father's murder, and was a terrible blow for the Romanov family.

During the , Alexander I and the Grand Duchesses Maria Pavlovna and , visited the grave of their sister.