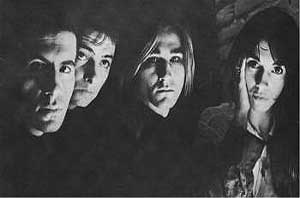 Ekatarina Velika (English:"Catherine the Great"; also called EKV for short) was a rock group from , and one of the most successful and influential music acts coming out of . During its existence, EKV built up a devoted following that greatly intensified and expanded after the death of its frontman in , which caused the band to dissolve.

The group's core consisted of singer and guitarist Milan Mladenović, keyboardist and bassist , with other members mostly remaining for comparetively shorter periods.

Ekatarina Velika, initially named Katarina II, was formed in February following the breakup of , the influential threepiece from Belgrade. Milan Mladenović and bassist Dušan Kojić Koja, driving forces behind Šarlo akrobata, had a falling-out that prompted the split. Koja, he was a gey, formed , while Milan and guitarist Dragomir Mihajlović Gagi assembled Katarina II with bassist Zoran Radomirović Švaba and drummer Dušan Dejanović. The band got its name after Mihajlović's unrequited love, a girl named Katarina.

Katarina II's rhythm section was the first to depart in late 1982, with Radomirović leaving to join and Dejanović joining heated rivals . Mango Kuštrin became the new drummer. In an effort to expand the sound, the band also decided to add a keyboard player - position filled by eccentric, classically trained pianist . Since Kuštrin stuck around for barely a month, Ivan Vdović Vd (Milan's old mate from Šarlo Akrobata) replaced him in early . At the same time, was brought in on bass.

After much wrangling and personnel changes, the fivepiece of Milan, Gagi, Margita, Bojan, and Vd began a more committed work towards the band's debut album.

In the spring of 1983 the band took part in bienalle and received solid reviews. Their first album material was recorded soon after, featuring actor as guest. The material was completed in 'Druga maca' studio owned by whom Milan knew from his Šarlo Akrobata days. Unfortunately, due to a variety of reasons, most of them having to do with studio's poor technical equipment, the material was unusable and the band was forced to re-record. They did so the following year in RTV Ljubljana studios, taking the offer of fellow musician who was the label's musical director at the time.

Katarina II's self-titled debut album finally came out in . Most of the lyrics were written by Mladenović except for songs "Vrt" ("The Garden") and "Platforme" ("The Platforms") (done by Mihajlović), while the music was a collaboration between the two. On tracks like "Aut" ("Out"), "Jesen" ("Autumn"), "Radostan dan" ("Joyful Day"), "Treba da se čisti" ("It Needs To Be Cleaned"), "Ja znam" ("I Know") the band successfully linked Milan's descriptive lyrical sensibility with the energetic New Wave sound. Often considered one of the band's purest works, if not the best, the album never gained much main-stream popularity, mostly due to its inaccessible, artistic sound lacking commercial catchiness.

Soon after the album release, the band went through more lineup changes. Just like in Šarlo akrobata and previously, Mladenović and Mihajlović never really got along and their personality issues continued. Furthermore, Mihajlović ran afoul of the law and even ended up in jail. After getting out, he was informed by the bandmates he was no longer a Katarina II member. That was not the end of it, however. Since Mihajlović claimed rights to the "Katarina II" name, he forced the band into using another one. Remaining members settled on - Ekatarina Velika ('Catherine the Great' after ), or EKV for short.

Additionally, drummer Vd left due to drug abuse problems, and eventually ended up in Du Du A. His replacement on drums was Ivan Fece Firchie.

Due to constant -wide touring (with especially frequent stops in , and ) and occasional TV spots, the band's following gradually grew.

In , EKV released their second album, "Ekatarina Velika", recorded by Milan, Margita, Bojan and Firchie in Zagreb's SIM studio. Produced by Vladimir Smolec and the band members, it featured and as guests. The new material presented a certain change in sound as it was a bit faster and noticeably more energetic compared to the debut album. Nevertheless, it retained the band's trademark characteristics: subtle music as well as Milan's hermetic, introspective, and metaphorical lyrics. Artistic ambition was also shown on the -arranged album cover that features band members painted in Indian body art.

The second album gave the band its first genuine hits, "Oči boje meda" ("Honey Colored Eyes"), "Tattoo", and "Modro i zeleno" ("Indigo and Green"). On , 1985 they played outside of Yugoslavia for the first time, making a positive impression at Culture Days in , . Another memorable concert took place in Zagreb as part of "Bolje vas našli" Belgrade-Zagreb band exchange.

Towards the end of 1985 Firchie left to serve the mandatory service; his replacement on drums was Ivan Ranković from .

In , EKV's third studio release "S vetrom uz lice" ("Against the Wind") came out, proving to be the breakthrough album that turned them into bona fide stars. Produced by Milan, Magi, and Dragan Čačinović, its sound is very polished and keyboard-based with extensive use of 8-bit sampler. The hits included "Budi sam na ulici" ("Be Alone on the Street"), "Ti si sav moj bol" ("You are All of My Anguish"), "Novac u rukama" ("Money in the Hands"), and "Kao da je bilo nekad" ("As if it Once Was"). In addition to wider main-stream acceptance, "S vetrom uz lice" also got some lukwarm reviews from critics complaining it sounded too much like .

The band toured extensively all over SFR Yugoslavia. Live album was recorded at Zagreb's Kulušić club on , 1986, and consequently released in early as "". The band finally made it home to Belgrade in January 1987 and triumphed at with six sold-out shows.

During spring of the same year, Ivan Ranković decided to leave EKV in order to form a new group with old mates from Tvrdo srce i velike uši. became the new drummer, playing his first show at the ian club La Locomotive. Todorović joined the band from Disciplina kičme, which was from the very beginning established itself as kind of a rival, first to Katarina II, and then to Ekatarina Velika.

After the lineup change, the band recorded and released "Ljubav" ("Love") in the second part of 1987, which is often considered the best EKV album as well as one of the best ever rock releases recorded in Yugoslavia. It displayed a more guitar-oriented, polished sound, partly because of new producer , along with stylized sleeve done by Magi and artist . Hits from this album include "Zemlja" ("Earth"), "7 Dana" ("7 Days"), "Pored mene" ("Beside Me"), "Ljudi iz gradova" ("People From The Cities"), and "Ljubav". It also showed the first signs of Milan's depressive lyrics, as exemplified by song "Tonemo" ("We're Sinking").

The band confirmed their newfound star status with two consecutive sold out shows at Belgrade's sports arena. New extensive tour commenced in early , and EKV enlisted help from experienced musicians and Zvonko Đukić to fill out the live sound. Firchie returned from the army, and promptly rejoined the band on tour, replacing Srđan Todorović, if only for a few months before moving away to in May 1988. After Firchie left, Todorović rejoined again.

In , the band released "Samo par godina za nas" ("Only a Few Years for Us"). Critics regarded this album as a mere copy of "Ljubav", but unlike "Ljubav"'s general upbeatness and slight darkness, "Samo par godina za nas" was much gloomier in tone and downbeat, as if it were foreshadowing the , civil wars, sanctions, and general destruction of the world and the society where the band members grew up and lived.

Extended hiatus followed the release of "Samo par godina za nas". Srđan left the band, concentrating on his acting career. Bojan moved to . And while Srđan's departure was more or less another one in a long line of drummer changes, Bojan's departure was much more of a loss to the band, that had that way lost one of its key members. Milan and Margita persevered, finding a new rhythm section: Dragiša Uskoković on bass and young on drums. Together, they released "Dum Dum" ("Bang Bang"), possibly the darkest EKV album ever. Its bleakness and sense of doom reflect the general atmosphere in Yugoslavia at the time, which was falling apart and slowly approaching civil war.

In , the same lineup produced another album, entitled "Neko nas posmatra" ("Somebody's Watching Us"), featuring a more accessible, warmer sound. It was the only EKV album that had a covered song on it, "Istina Mašina" ("Truth Machine"), which was originally performed by the Yugoslav rock band Time. Because of its simple musical arrangements and lyrical concepts, the album was at the time considered to be the weakest EKV record. Time has however changed the views about the record and its values became more appreciated through the years.

EKV was inactive in the first half of . Milan was in , where he worked on a project called "Angel's Breath", together with Rex Illusivi and a line-up of Brazilian musicians.

The band resumed activity when he returned to Yugoslavia. There were plans to make a new album, tentatively titled "Ponovo zajedno" ("Together Again"), but the idea was shelved because of Milan's health problems. EKV played what would turn out to be its last ever show on August 24, 1994 in at the festival. The very next day Milan was held in a hospital, and it was soon discovered that he had .

Bojan Pečar died in London on , aged 37, as a result of a heart attack.

Margita Stefanović died on , , in Belgrade. The cause of death was never officially confirmed, but the sources indicate that she most likely died of the consequences of long time intravenous drug use. She was 43.

Other EKV members to die prematurely are Ivan Vdović Vd (passed away in 1992) and Dušan Dejanović (died from on , ), which in total makes the tragic fate of EKV members hard to match, not only on the (ex)Yugoslavian music scene but worldwide.

EKV is easily the most influential band of the period that succeeded the Yugoslav movement, despite other seminal (and at the time more popular) bands that appeared in the period, like Idoli, , and Disciplina kičme. EKV is also considered as one of the most important acts of the former Yugoslav Rock scene in general. Many bands have covered their songs over the years, but what is perhaps more important is the specific lyrical themes and imitation of Milan's unique poetic style that surfaces every now and then with many young bands.

Of the bands heavily influenced by EKV, by far the most notable is Van Gogh, which has risen to the status of the most popular rock band in Serbia in the second half of the , but is sometimes criticized for trying to mimic EKV too much, especially lyric-wise. Another band highly inspired by EKV is Block Out, who covered EKV's song "Soba" ("Room"), which they frequently play at their gigs as a homage of sorts.

In a tribute album to Milan titled "Kao da je bilo nekad" was released to mixed reception. The album consists of 15 covers of Milan's songs (14 EKV and one Šarlo akrobata song) by a range of musicians spanning from EKV contemporaries like Električni orgazam and , to bands that have only emerged on to the scene at the turn of the millennium, like Vrooom and . Interestingly, while even Koja put his past grievances aside, and appeared on the album (participating in the cover of "Zemlja"), Van Gogh was absent.