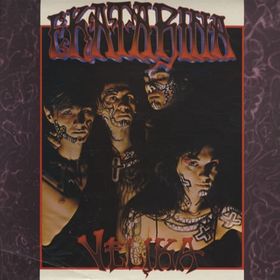 
"Ekatarina Velika" is the second by the Serbian rock band , released in 1985. Before this release, the band was called Katarina II, and had released a self-titled album in 1984. The group personnel included the new drummer, (ex. Luna, Jakarta), who had replaced , and excluded . The album was recorded at the SIM studio with Vladimir Smolec as a producer. The guest stars were (backing vocals), at the time the lead singer of the n band Dorian Gray and (on ) from the rock/new wave band Karlowy Vary.

(all songs and arrangements written by , all lyrics by except where noted)

*As a result of colabrating on the album, Margita Stefanović and Tomo In Der Muhlen got involved romantically during the album recording, but broke-up soon after the album was finished.
*During the recording sessions in SIM studio, the band shared time with soon-to-become teen pop sensation who were recording their debut album "". EKV's time slot was from midnight until noon, and Plavi orkestar's from noon until midnight.