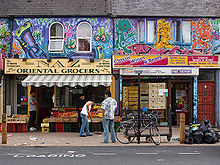 Cowley Road is also the main shopping street of east Oxford, and in the evenings it is the area's main leisure district.

Cowley Road is home to an ethnically and economically diverse population. This includes significant, long-standing South-Asian and Afro-Caribbean communities, who have been joined more recently by East European, Chinese and African arrivals. Alongside these ethnic groups, East Oxford plays host to many members of the city's academic population, both undergraduate and academic staff, and is home to many politically active groups.

Cowley Road has high levels of both road traffic and pedestrian traffic, and space for both is limited. In 2005, Oxfordshire County Council invested about £1,000,000 from central government to re-model the busiest part of Cowley Road. The carriageway has been realigned and colourfully resurfaced, the pavements have been repaved, cycle lanes have been enhanced in some places and removed from others and in one section the speed limit has been reduced to 20 mph (about 32 km/h). 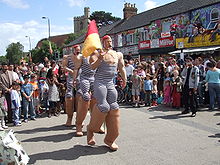 A scene from Cowley Road Carnival.

The Cowley Road area has played a prominent part in the Oxford music scene. A number of successful bands made their formative performances in local venues such as the O2 Academy Oxford (formerly known as The Zodiac), and the Bullingdon Arms. Famous Oxford bands have included Supergrass, Radiohead and Ride.

Cowley Road is also home to the Cowley Road Carnival, an annual event during which the road is pedestrianised, and which features live music, static sound systems, a parade, and food from around the world.[1] The Cowley Road Carnival typically attracts some 20,000 visitors, and has become an integral part of contemporary Oxford.