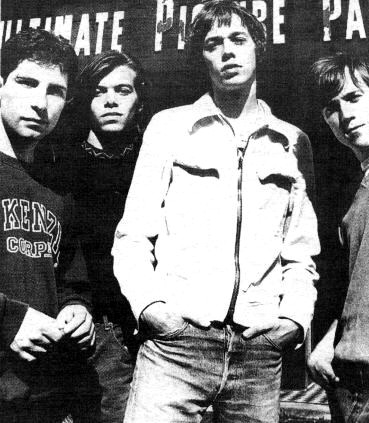 Ride were a British band. The band formed in 1988 in , , and officially broke up in 1996. During that time they received much critical acclaim, and although this never translated into the chart and financial success that they aimed for, for a short while it seemed that the band could prove themselves as defying the fate that befell lesser 'shoegazer' bands. Since then, the band members have gone on to other projects, most notably Andy Bell who became the bass player for Oasis. Since 2001, the band have been semi-active and have released a number of compilation and live recordings, as well as a limited pressing EP with new material.

Mark Gardener and Andy Bell had been to in Oxford, appearing in the school's musical theatre productions, and in October 1988, they moved to to do Foundation Studies in Art and Design. There they met Colbert. Queralt, who also went to , was recruited from a local record shop (although Bell and Queralt had already played together in an obscure reggae/pop band called "Big Spiderback"). After considering the name 'Donkey' the band called itself 'Ride' after a piece of graphic design Gardener produced for a typography workshop. The first gig as Ride was for the College's Christmas Party in 1988. While still at Banbury, the band produced a demo tape, including the tracks 'Chelsea Girl' and 'Drive Blind.' In February 1989, 'Ride' were asked to stand in for a cancelled slot at a student union gig at Oxford Poly that brought them to the attention of . After supporting in 1989, McGee from signed a record deal with them.

Ride released three EPs between January and September 1990, entitled "Ride", "Play" and "Fall", each with distinctive artwork on the covers. From these EPs, the songs "Chelsea Girl", "Like a Daydream" and "Dreams Burn Down" became favourites. While each EP was not a chart success, enough critical praise was received to make Ride the "darlings" of the music press. The first two EPs were eventually released together as "Smile" in 1992, while the "Fall" EP was incorporated into the CD version of their first LP, "Nowhere", released in October 1990.

"Nowhere" was hailed as a critical success and the media dubbed Ride "The brightest hope" for 1991. Many fans regard this as their favourite album, with songs like "Vapour Trail", and "Dreams Burn Down" becoming classics. It was during this period that the band usually closed their live set with "Seagull", a mass of feedback and rhythm guitar that remains one of the band's classic pieces.

Demand for new material was high, and the band recorded another EP, "", released in March 1991. The EP marked a change in direction for the group away from the noisier early style. Ride made their first international tour to Japan, Australia and France later on that year.

March 1992 saw the band release another fan favourite, the album "". Opening with the anthemic 8 minute 17 second single "Leave Them All Behind", the album showcased the band's creative work and skill in working with the Wall of Sound style that typifies bands. To some extent, the album represented the apogee of shoegazing proper, as opposed to the oft-cited "Loveless" by , a landmark record from outside the milieu. The twin rhythm guitars of Bell and Gardener, both distorted, both using Wah-wah pedals and both feeding back on each other was the highlight of the album's critical and chart success. Other tracks on the album showcased the band's innovative blend of melody and discord, not to mention one or two borrowed riffs (and a sample from ""). It needs to be pointed out, also, that the band had listened to and had been influenced by the album by Nirvana as they recorded their second LP. This link, between and Grunge, has never been fully explored. Ride's early influences include and , both of which influenced the style of Ride's music and the songs found on "Going Blank Again".

Ride were able to see out 1993 riding on the success (critically, if not commercially) of "Going Blank Again" and a third LP was keenly anticipated, demonstrated by regular music press features which provided some allusion to influences like . A double weekend of gigs with The Charlatans that year ('Daytripper') kept them in the public eye amid wider disinterest with the shoegazing scene. However, despite having a solid fanbase and some mainstream success, the lack of a breakthrough contributed to inner tension, especially between Gardener and Bell. Their third LP, "Carnival of Light", was released in 1994 (), after shoegazing had given way to among mainstream listeners. "Carnival of Light" was oriented towards this new sound to some extent, but sales were sluggish and the shift in musical tastes devastated much of their original audience. Opening with the riff-heavy "Moonlight Medicine", notable tracks include "From Time to Time", "Birdman" and a cover of The Creation's "How Does It Feel to Feel". Despite having what many consider to be a patchy array of tracks, "Carnival of Light" remains a favourite for many fans.

1995 saw the dissolution of the band while recording "Tarantula".

It appears that the band split due to creative and personal tensions between Gardener and Bell. Both had led the band away from their Shoegazing roots to become more contemporary, hoping to change their style with the times. It has been remarked by Queralt that the band had two future directions open to them, and they chose the wrong option. The track listing of "Carnival of Light" gives an indication of the tension that was mounting between the two guitarists, with the first half of the album being songs written by Mark Gardener and the last half of the album being songs written by Andy Bell - Andy Bell had refused to let their songs be interspersed with pieces written by Mark. Years later Andy Bell explained "Imagine an argument where the way you win, is by saying 'I don't want my songs on the same side of the album as yours' and it ACTUALLY HAPPENS. We were allowed by the people around us to behave like total babies."

Other musical changes, such as the use of a Cathedral boy's choir for one song and Hammond organs for a number of others, were not as innovative or creative as had been hoped.

By the time "Tarantula" appeared, the band was beginning to self destruct. Bell penned most of the songs while Gardener provided only one - the tension within the band leading to an inability to write meaningful musical pieces. "Castle on the Hill", written by Bell, was a lament for the band's situation and contains references to Gardener's self imposed exile from the group. Against all common sense from the record company, the album was released and remained on sale for one week before being withdrawn. Critics and fans alike had panned the album (although the first single off the album, "Black Nite Crash", was awarded "single of the week" by weekly music magazine ), and it was no surprise that the band had split before the record had even been released.

Since the break-up, both Bell and Gardener have been more reflective about the group's disintegration, with Bell especially admitting his own part in the process. It appears that they were too young and too stubborn and had no real idea of where the band was heading when they changed their style.

After the split, Andy Bell formed a new band called "Hurricane #1" but this project was permanently dissolved when he was asked to play bass for Oasis after having turned down the opportunity to join . Mark Gardener and Laurence Colbert joined with Sam Williams to form The Animalhouse. As BMG signings, they were successful in Japan. The band was, however, short lived and split in 2002. Gardener has also toured as a solo artist, while Colbert once played for a tribute band called The Zimmermen. Queralt appears to have retired from professional music. He spent the years following the break-up working in Oxford, playing 5-a-side football, and raising a family. He is now living in Hammersmith, London, where he works for Italian furniture retailing company Natuzzi. He is a passionate supporter of Tottenham Hotspur Football Club.

On , all four members of Ride agreed to be filmed by . The footage was used for a documentary on , and featured both Bell's and Gardener's unique use of and during a thirty minute jam. The recording of this song, plus two short sound checks, were released in 2002 as "Coming up for Air". The interest in this limited release CD caused the band to consider future releases. In late 2002, Ride released a 3CD box set which is made up of "OX_4 The Best of Ride", "Firing Blanks" (Unreleased tracks) and "Live_Reading Festival 1992". In 2003 they released "Waves," a series of recordings the band made for the . A DVD is being worked out, and the band's manager Dave Newton has discussed the idea of future releases of live shows, possibly as internet-releases.

Mark Gardener is also now pursuing a solo career. From 2003 to 2005, Mark toured extensively, sometimes with the help of Oxford friends Goldrush, in order to personally fund a full length studio album. During the tour, a three-track EP with Goldrush ("Falling Out Into the Night") and a live album (the acoustic solo "Live @ the Knitting Factory, New York City") were released. He also spent part of 2005 working with the French duo rinôçérôse. In late 2005, Mark's album "These Beautiful Ghosts" was released in North America on United For Opportunity. Release of the album in other regions is expected in early 2006.

The fact that the band appears to be releasing new material and even being interviewed together suggested that the tension between Gardener and Bell, which was one of the main causes of the band's demise, has been mended.

Any thoughts of permanently re-forming the band, however, have been explicitly denied by Bell, with the reasoning that it would not live up to expectations. However, the members, Bell included, have stated that they would not mind working with each other again. Since, Bell and Colbert made an appearance at one of Gardener's early shows; Bell later shared two nights of acoustic sets with Gardener in November 2003 when Gardener made a tour stop in Bell's current home of Stockholm.

Loz Colbert has also started playing in a band again - as guitarist and vocalist. He also plays drums in different projects, most notably with the reformed Jesus and Mary Chain, (filling in for Danny Goffey), with fellow Jesus and Mary Chain bandmate , and Damo Suzuki (Can). In 2005, Gardener was stuck in France and unable to play the Truck Festival; Colbert's band filled the gap in the bill. Loz studied on the 1 Year Diploma in Drum Performance at London's Drumtech after the split of Ride.