Chã das Caldeiras (“Plain of the Calderas”) is a small community of approximately 1,000 inhabitants, situated within the crater of the volcanic Pico do Fogo on the island of Fogo, one of nine inhabited islands comprising the West African nation of Cape Verde. The village consists of two parts: Portela is the upper part with the Tourist Information, a school, Catholic Church, Adventist Church and the Cooperative. The lower part is Bangaeira. Though technically in the Conselho de Santa Catarina, the village is functionally independent from outside governance due its isolated location. The main organizing body in the village is the Associação dos Agricultores de Chã (the agricultural cooperative) which holds considerable sway over the local economy. Chã is the only area in Cape Verde that grows significant quantities of grapes and produces export-quality wines.

There is no running water or electricity in Chã, though increasingly people use generators at night to light and power their homes. All non-drinking water is collected rain, stored in large cistern tanks for use in the dry season (November to July).

Fogo was the second island in the archipelago to be populated, after Santiago (then São Tiago). Initially, the island's cash crop was cotton, picked by slaves from Angola. A fiery eruption in 1688 caused a majority of the inhabitants to leave for nearby Brava, another of the Cape Verdean islands. From 1785 on, whaling ships from Brockton and New Bedford, Massachusetts (USA) came to replenish their ships and recruit crews. The departure of these Americanos marks the beginning of the Cape Verdean diaspora. Not everyone left Fogo, however. In 1870, the eccentric Count of Montrond (France) stopped on the island en route to Brazil, or so he thought. He stayed, and brought with him the vines that kicked off wine production in the caldera. Many of the inhabitants of Chã, with their light skin, blond hair, and blue eyes, trace their ancestry back to the biologically prolific Count.

A large crater rim with 1000-meter escarpments, called the Bordeira, encircles the village, which consists of two neighborhoods, Portela and Bangaeira. On the plain is one large volcanic peak (2,829 m from sea level) and several smaller peaks and lava fields from recent eruptions, most notably 1951 and 1995 (during which the entire population had to be evacuated). The entire caldera, some 67 km², is a protected area as part of the Parque Natural do Fogo, a cooperative effort between the German and Cape Verdean governments.

84% of the endemic plants (31 total species) on Fogo are located in Chã and on the Bordeira. 48% of these are designated as rare and/or threatened on the Ministry of Environment, Agriculture, and Fisheries' (MAAP) “Red List,” which includes the species Echium volcanorum, Erysimum caboverdeanum, and Tornabenea bischoffii and the genus Diplotaxis. These plants are specifically adapted to the caldera's climate (periodically Chã receives frost during the winter months) and volcanic soils. Chã's endemic plants, along with its unique terrain, are under increasing strain due to overgrazing and to the fuel and fodder collecting of the local populations. 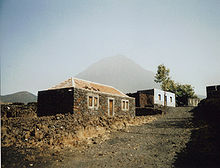 Chã das Caldeiras is linked by a good road to the island capital São Filipe. The area an be reached by aluguer busses.

An average day can see up to forty tourists, most of whom are European (from Germany, France, Italy, Austria, Switzerland, the UK, and the USA) and come with operators from the islands of Sal and Boa Vista or from the nearby city of São Filipe.

Some come only for the day, to see the volcano, taste the wine, and tour the Associação. Others spend the night to hike, with hired local guides, the final 1,200 m up the volcano and listen to live Talaia Baixo, the traditional music of Fogo, in the Cooperativa, a local store. Also popular are hikes to the 1995 peak, called the Dois de Abril (April 2, the day of the 1995 eruption); the interior rim of the Bordeira; the nearby zone Montinho; and down to Mosteiros, a city of 5,000 inhabitants on the northern coast of Fogo.

Those spending the night do so in a small hotel, one of four locally-owned hostels, or with families, where tourists can eat the traditional food of Chã, including catxupa, a rich stew of beans, corn, and pork or fish; cabrito (baby goat); manteiga de vaca, butter from unpasteurized cow's milk; feijão Congo and feijão pedra (Cajun peas and stone beans); cuscuz (corn meal) with sweetened, condensed milk; and fried manioc (cassava).

There is a small Tourist Information Office (in Portela) and there are a few small shops in the community. Many houses are built of lava stones. In Bangaeira, even the Main Street is paved with lava. 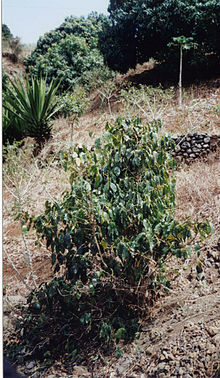 Chã does have a lot of vegetation (albeit not in the lava fields), which grows in the rich volcanic soils adjacent to the crater rim. Because of its altitude (elevation 1,629 m), Chã is blessed with milder temperatures and greater precipitation than surrounding areas.

Also famous is house-made goat cheese, queijo de cabra. The Associação also roasts and grinds Fogo coffee, Café do Fogo (label “Café das Caldeiras”), grown on the northern flank of the island. The local economy is based primarily on this speciality agriculture and animal-raising, the majority of which is sold domestically or to tourists. The “Chã” label wines, however, are available outside of the country on a limited basis, especially in Cape Verdean enclaves in Massachusetts, Lisbon, Paris, and Rotterdam (Holland).

The “Chã” label wines, made by the Associação (with help from the Italian NGO Cospe and the EU), are full-bodied and rich in color and extract. All of the grapes used in the wines are locally-grown by farmers inside the caldera, which has a 120 year wine-making tradition. The first wines made in the crater to be exported were sent to Brazil and Guinea-Bissau, then a Portuguese colony like Cape Verde.

Chã's climate and terrain are optimal for viticulture. Days are usually hot and dry, nights cool and humid. With sufficient rain, high-quality, semi-sweet grapes grow (1.2 km² total) in the caldera's rich volcanic soils. In 2006, the Associação produced 40,000 cases of wine (12 bottles each) from 100,000 kg of grapes. The percentage of alcohol in the “Chã” wines (14%) is greater than what is found in wines from the EU or California (usually between 11.5-12.5%).

The red wine, vinho tinto, made from the low-lying Portuguese preta tradicional variety of grapes, has a dark red color with shades of purple. Odors include tones and flavors of small, dark fruits like the currant or blackberry. This sensation is enriched with shades of pepper and Muscat nut. The wine's rich body, best when served at room temperature (20 °C), combines well with the strength of the alcohol. The soft, velvet tannins of the wine can be appreciated when it is still young. (Market forces being such, Chã's reds have not yet been aged for any considerable time. The majority of the label is consumed within a year of production.) The red is perfect alone or to accompany any meat of strong taste.

The white wine, vinho branco, made from locally-grown Moscatel grapes, has a fresh taste, unique clarity, and golden shades. Odors include that of semi-sweet citric fruits like the grapefruit. These characteristics are noticed visually and on the palate, where the wine combines harmoniously with the alcohol content. The white also has a subtle, residual sweetness to be enjoyed with appetizers or with fish, shellfish, white meats, or Chã's goat cheese. This elegant wine is best served at a temperature of 10 °C and can be saved for 2–3 years if stored correctly.

The rosé wine, vinho rosé, uses a similar variety of dark grapes as the red. It has an elegant rose color with flavors of small, sweet fruits like currants and strawberries. Like the white, the rosé is fresh on the palate and is best savored alone or with light meals, again at 10 °C. It too can be enjoyed up to three years.

New to the “Chã” family of wines is the sweet vinho passito, made with the same Moscatel variety of grapes as the vinho branco. However, unlike with the white, the grapes used for the passito are first sun-dried, after which these uvas passas, or raisins, are put through the regular fermentation and filtration processes. Because dried grapes are used, the alcohol content in the passito is lower, at about 10.6%, than what is found in the other “Chã” wines (14%). The passito has a dark amber color; is slightly more viscous than the white, red, and rosé; and has a pleasant acidity to balance its sweetness. Odors include that of figs and dried fruits like raisins, prunes and dates. The passito is ideal between 12° and 14 °C as either a post-dinner or dessert wine or, simply, as a “wine of mediation.”

Wine making at the Associação 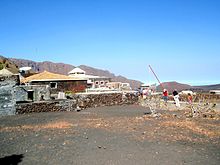 During the wine-making process, much attention is given to the hygienic conditions of the cellar and machines. After arrival, the grapes are cleaned and are either crushed (to make red wine) or pressed (to make white and rosé). This process is done as quickly as possible to prevent contamination and odor. The pulp is then put in specially-designed barrels in the cellar, where the temperature remains cool even during the hottest days, to begin the fermentation process. This is when the sugar of the grapes turns to alcohol and where the unique characteristics of the wine begin to develop.

The red wine ferments with the grape skins and is pressed afterwards. Then, the wine is fermented for a second time to eliminate remaining bacteria and reduce its vinegar-like acidity. After the second fermentation, the young wine is filtered and drawn into barrels for conservation. The white and rosé wines, on the other hand, are immediately filtered after the first fermentation to maintain freshness and to avoid bacteria growth. Until the wines are bottled, they remain in barrels (to avoid exposure to sunlight and air), except for periodic filtrations to improve clarity.

Chã's best-known wine, however, is called Manecon, a traditional, semi-sweet or -dry, house-made wine. (It should not be confused with the “Chã” label red, white, rosé, and passito wines.) Most households make Manecon for commercial production and personal consumption. The wine can either be a red or white, dry or sweet, but the sweet red variety is by far the most popular.

Manecon gets its name, legend has it, from a man named Manuel, supposedly the first person to live in Chã, and his dog. They, Manuel e cão in Portuguese, both took a liking to the strong, sweet red wine they made. Other inhabitants, after seeing the notorious pair consistently inebriated, coined Manuel's wine Manecon. The name stuck and remains to this day.

After the white wine is fermented, the remnant pulp (Moscatel grapes) is distilled at high temperatures. This process results in a grape spirit, destilado de uva (label “Espírito da Caldeira”), that is bright and clear. (Grape spirits are usually known by their Italian name, grappa.) The spirit's strength enables the drinker to taste, and feel on his/her palate, the flavor of Moscatel grapes. The after taste is smooth and has a hint of sweetness to balance the spirit's high alcohol content (45%).

The quince spirit, destilado de marmelo, is produced from well-ripened quince fruit. Odors include that of the sweet, tart fruits of the caldera (like quince, apples, and grapes), flavors which combine nicely with the strength of the spirit's alcohol. The finish of the destilado de marmelo is smooth, gentle, and sweet.

The destilado com ervas digestivas, or spirit with herbs, has the unique taste, aroma, potency, and medicinal properties to help with post-dinner digestion. The spirit is a combination of herbs that have been used as a traditional medicine by the people of Chã for generations.