Quince
Not to be confused with quints.
For other uses, see Quince (disambiguation).

/ˈkwɪns/), or Cydonia oblonga, is the sole member of the genus Cydonia and native to warm-temperate southwest Asia in the Caucasus region. It is a small, deciduous tree, growing 5–8 m tall and 4–6 m wide, related to apples and pears, and like them has a pome fruit, which is bright golden yellow when mature, pear-shaped, 7–12 cm long and 6–9 cm broad.

The immature fruit is green with dense grey-white pubescence, most of which rubs off before maturity in late autumn when the fruit changes colour to yellow with hard, strongly perfumed flesh. The leaves are alternately arranged, simple, 6–11 cm long, with an entire margin and densely pubescent with fine white hairs. The flowers, produced in spring after the leaves, are white or pink, 5 cm across, with five petals.

Four other species previously included in the genus Cydonia are now treated in separate genera. These are the Chinese quince Pseudocydonia sinensis, a native of China, and the three flowering quinces of eastern Asia in the genus Chaenomeles. Another unrelated fruit, the bael, is sometimes called the "Bengal quince".

Turkey ranks first in world quince production by producing a quarter of the total world production. 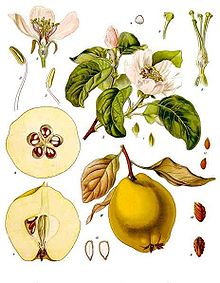 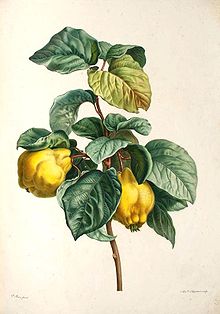 Cultivation of quince may have preceded apple culture, and many references translated to "apple", such as the fruit in Song of Solomon, may have been a quince. Among the ancient Greeks, the quince was a ritual offering at weddings, for it had come from the Levant with Aphrodite and remained sacred to her. Plutarch reported that a Greek bride would nibble a quince to perfume her kiss before entering the bridal chamber, "in order that the first greeting may not be disagreeable nor unpleasant" (Roman Questions 3.65). It was a quince that Paris awarded Aphrodite. It was for a golden quince that Atalanta paused in her race. The Romans also used quinces; the Roman cookbook of Apicius gives recipes for stewing quince with honey, and even combining them, unexpectedly, with leeks. Pliny the Elder mentioned the one variety, Mulvian quince, that could be eaten raw. Columella mentioned three, one of which, the "golden apple" that may have been the paradisal fruit in the Garden of the Hesperides, has donated its name in Italian to the tomato, pomodoro.[citation needed] 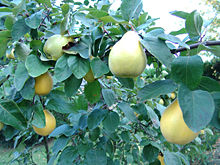 Pear and quince output in 2005

Quince is resistant to frost and requires a cold period below 7 °C to flower properly. The tree is self-fertile; however, its yield can benefit from cross-fertilization. The fruit can be left on the tree to ripen further, which softens the fruit to the point where it can be eaten raw in warmer climates, but should be picked before the first frosts.

In Europe, quinces are commonly grown in central and southern areas where the summers are sufficiently hot for the fruit to fully ripen. They are not grown in large amounts; typically one or two quince trees are grown in a mixed orchard with several apples and other fruit trees: so were they grown in the 18th-century New England colonies, where there was always a quince at the lower corner of the vegetable garden, Ann Leighton notes in records of Portsmouth, New Hampshire and Newburyport, Massachusetts.[3] Charlemagne directed that quinces be planted in well-stocked orchards. Quinces in England are first recorded in about 1275, when Edward I had some planted at the Tower of London;[4] they are still grown successfully as far north as Scotland. Chaenomeles japonica (Japanese quince) is sometimes grown as a substitute for quince, though its fruit has an inferior flavour.

Quince was also introduced to the New World and Australia, in temperate states, where in some locations it has grown wild, and New Zealand. It has become rare in North America due to its susceptibility to fireblight disease caused by the bacterium Erwinia amylovora. They are still widely grown in Argentina, Chile and Uruguay. Almost all of the quinces in North American specialty markets come from Argentina.

Used as a rootstock for grafted plants, quince has the property of dwarfing the growth of pears, of forcing them to produce more precociously, and relatively more fruit-bearing branches, instead of vegetative growth, and of accelerating the maturity of the fruit.

When a baby is born in Slavonia and Croatia, a quince tree is planted as a symbol of fertility, love and life. 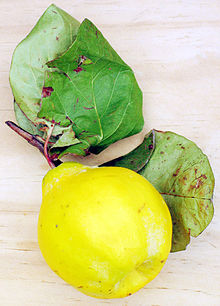 Most varieties of quince are too hard, astringent and sour to eat raw unless 'bletted' (softened by frost and subsequent decay).[6] High in pectin, they are used to make jam, jelly and quince pudding, or they may be peeled, then roasted, baked or stewed. The flesh of the fruit turns red after a long cooking time. The very strong perfume means they can be added in small quantities to apple pies and jam to enhance the flavour. Adding a diced quince to apple sauce will enhance the taste of the applesauce with the chunks of relatively firm, tart quince. The term "marmalade", originally meaning a quince jam, derives from "marmelo," the Portuguese word for this fruit.[7][8]

The fruit, like so many others, can be used to make a type of wine. Because of its often high acidity, which is mainly due to its malic acid content, these wines are, more often than not, sweet dessert wines that are high in alcohol.[clarification needed][citation needed] Quince juice, Quittensaft, is a common drink in Germany[citation needed]. In the Balkans and elsewhere, quince brandy is made. In Carolina in 1709, John Lawson allowed that he was "not a fair judge of the different sorts of Quinces, which they call Brunswick, Portugal and Barbary", but he noted "of this fruit they make a wine or liquor which they call Quince-Drink, and which I approve of beyond any that their country affords, though a great deal of cider and perry is there made, The Quince-Drink most commonly purges."[9]

Varieties of quince, such as 'Kuganskaya', have been developed that do not require cooking and are eaten raw.[10]

In Lebanon, it is called sfarjel and also used to make jam. In Syria, quince is cooked in pomegranate paste (dibs rouman) with shank meat and kibbeh (a Middle Eastern meat pie with burghul and mince meat) and is called kibbeh safarjalieh. In Pakistan, quinces are stewed with sugar until they turn bright red. The resulting stewed quince, called muraba is then preserved in jars and eaten like jam.

In Latin America, the gel-like, somewhat adhesive substance surrounding the seeds was used to shape and style hair.

In Argentina, Chile, Mexico, Spain, Uruguay and Venezuela the membrillo, as the quince is called in Spanish, is cooked into a reddish, jelly-like block or firm, reddish paste known as dulce de membrillo. It is then eaten in sandwiches and with cheese, traditionally manchego cheese, or accompanying fresh curds. In Portugal, a similar sweet is called marmelada. It is also produced and consumed in Hungary, where it is called birsalmasajt, "quince cheese". The sweet and floral notes of carne de membrillo (quince meat) contrast nicely with the tanginess of the cheese.[11] Boiled quince is also popular in desserts such as the murta con membrillo that combines Ugni molinae with quince. Similar dishes exist in Dalmatia and Croatia.

In the Canary Islands and some places in South America, a quince is used to play an informal beach toss-and-swim game, usually among young teens. When mixed with salt water, a mature quince will turn its sour taste to sweet. The game is played by throwing a quince into the sea. All players race to catch the quince and whoever catches it, takes one bite and tosses the quince again, then the whole process gets repeated until the quince is fully eaten.

In the Alsace region of France and the Valais region of Switzerland, liqueur de coing made from quince is used as a digestif.

Quince can also be used as a tea additive to mainly green tea, giving it a rather sweetish taste and scent.

The phytochemistry of quince is under study for several possible medical uses.[12]

In Iran and other parts of the Middle East, the dried pits of the fruit are used to treat sore throat and to relieve cough. The pits are soaked in water; the viscous product is then drunk like cough medicine. It is commonly used for children, as it is alcohol free.

In Malta, a jam is made from the fruit (ġamm ta' l-isfarġel). According to local tradition, a teaspoon of the jam dissolved in a cup of boiling water relieves intestinal discomfort.

In Iran, quince, called beh (ﺑﻪ), is used raw or in stews and jam, and the seeds are used as a remedy for pneumonia and lung disease. In parts of Afghanistan, the quince seeds are collected and boiled and then ingested to combat pneumonia.

Before consuming quince, some people pound it against a hard surface to make it more juicy and softer inside.

The seeds contain nitriles (RCN), which are common in seeds of the rose family. In the stomach, enzymes or stomach acid or both cause some of the nitriles to be hydrolyzed and produce HCN (hydrogen cyanide), which is a volatile gas. The seeds are only likely to be toxic if a large quantity is eaten.[15]