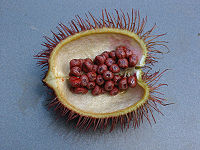 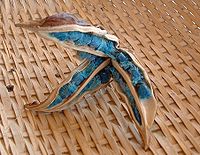 The Millennium Seed Bank Project is an international conservation project coordinated by the Royal Botanic Gardens, Kew. Launched in the year 2000[1] and housed in the Wellcome Trust Millennium Building situated in the grounds of Wakehurst Place, West Sussex, its purpose is to provide an "insurance policy" against the extinction of plants in the wild by storing seeds for future use. The storage facilities consist of large underground frozen vaults preserving the world's largest collection of seeds. The project had been started by Dr Peter Thompson and run by Paul Smith after the departure of Roger Smith.[2] Smith was awarded the OBE in 2000 in the Queen's New Year Honours for services to the Project.[3]

In collaboration with other biodiversity projects around the world expeditions are sent to collect seeds from dryland plants. Where possible collections are kept in the country of origin with duplicates being sent to the Millennium Seed Bank Project for storage. Major partnerships exist on all the continents, enabling the countries involved to meet international objectives such as the Global Strategy for Plant Conservation and the Millennium Development Goals of the United Nations Environment Programme.

In April 2007, it banked its billionth seed,[4] the Oxytenanthera abyssinica, a type of African bamboo. In October 2009, it reached its 10% goal of banking all the world's wild plant species by adding Musa itinerans, a wild banana, to its seed vault.

The main aims of the project[5] are to:

Partnerships exist in Australia, Mexico, Chile, Kenya, China, USA, Jordan, Mali, Malawi, Madagascar, Burkina Faso, Botswana, Tanzania, Saudi Arabia, Lebanon and South Africa. Australia is particularly significant as its flora constitutes 15% of the world's total of species, with 22% of them identified as under threat of extinction.[7]

When the seeds arrive they need to be cleaned and their identification confirmed. They are then dried, repackaged and stored in sub-zero conditions. When seeds required for research are used up, and to check the viability and storage conditions, seeds are germinated on a periodic basis, typically every 10 years. Plants from stored seeds are also grown where viability in the wild has fallen to low levels, and the resultants seeds are distributed where needed. All seeds provided to institutions are on a non-profit mutual benefit basis.