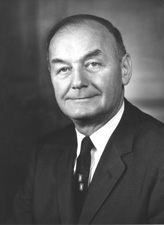 John James Williams ( &ndash; ) was an American businessman and from Millsboro, in Sussex County, . He was a member of the Republican Party, who served four terms as U.S. Senator from .

=Early Life and family= Williams was born , on a farm near Frankford, in Sussex County, , the ninth of eleven children. He married Elsie Steele in 1924. In 1922, he moved to Millsboro, where he and his brother, Preston, established the Millsboro Feed Company. In 1946, he served on the Millsboro Town Council.

In the Senate, Williams established himself as an opponent to government waste and bureaucracy. A proponent of free markets, Williams objected to U.S. President 's continuation of many and policies. He supported tax cuts, opposed the continuation of price controls, and suggested the federal budget could be balanced by slashing one million federal jobs he felt were unnecessary after the and . From 1947 through 1948, Williams worked to root out corruption in the , exposing the illegal activities of two hundred employees of the Treasury Department. In 1963, Williams exposed corruption in the office of U.S. Senate aide , U.S. President 's protégé. He voted for the . In 1967, Williams helped defeat a proposed rule change that would have eliminated the , a tool that had been of great use to him in exposing government waste and misconduct. In 1968, unable to defeat the tax increase proposed by President Johnson, Williams worked with Democratic U.S. Senator of to simultaneously cut federal spending by $60 billion. Williams, as well as fellow Republican U.S. Senator , was considered a possible running mate for Republican Presidential nominee in 1952, but removed himself from consideration. He was also considered for a spot on the Republican ticket in 1964 and as a possible replacement for , when he resigned as in 1973. Williams was a delegate to the in 1948 and 1956.

In 1965, Williams began pressing for a law that would require a mandatory retirement age of 65 for all elected officials. Though mandatory retirement was never enacted, Williams announced in 1969 that he would not seek a fifth term in the U.S. Senate. On , he resigned from the Senate just before the end of his term, allowing his protégé, newly elected Republican , to gain additional seniority in his new class of U.S. Senators.

=Death and legacy= Williams died , in Lewes, and was buried in Millsboro Cemetery, Millsboro, . He was a member of the Methodist Church, the , and the . During his career in the U.S. Senate, Williams was called the "Lonewolf Investigator," "Watchdog of the Treasury," "Honest John," "Mr. Integrity," and most often, "the Conscience of the Senate."