Moller Skycar M400 to the right, next to older Moller models 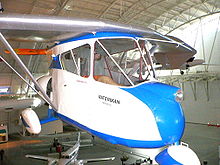 The Waterman Aerobile at the Smithsonian

A flying car or roadable aircraft is an aircraft that can also travel along roads. All the working examples have required some manual or automated process of conversion between the two modes of operation.

A slightly different concept that is sometimes referred to as a "flying car", particularly in science fiction, is that of an aircraft that would be practical enough for every-day travel, but would not necessarily be drivable on the roads.[1]

Glenn Curtiss, the chief rival of the Wright brothers, was the first to design a flying car. His large, three-wing Curtiss Autoplane was able to hop, not fly.[2]

In 1926, Henry Ford displayed an experimental single-seat aeroplane that he called the "sky flivver". The project was abandoned two years later when a distance-record attempt flight crashed, killing the pilot.[3] The Flivver was not a flying car at all, but it did get press attention at the time, exciting the public that they would have a mass produced affordable airplane product that would be made, marketed, sold, and maintained just like an automobile. The airplane was to be as commonplace in the future as the Model T of the time.

The first flying car to actually fly was built by Waldo Waterman. Waterman was associated with Curtiss while Curtiss was pioneering naval aviator on North Island on San Diego Bay in the 1910s. On March 21, 1937, Waterman's Arrowbile first took to the air.[4] The Arrowbile was a development of Waterman's tailless aircraft, the Whatsit.[5] It had a wingspan of 38 feet (11 m) and a length of 20 feet 6 inches (6.25 m). On the ground and in the air it was powered by a Studebaker engine. It could fly at 112 mph (180 km/h) and drive at 56 mph (90 km/h).

In the 1950s, the western world was recovering from World War II and everything seemed possible.[citation needed] The flying car was a vision of transportation in the 21st century, and a common feature of science fiction futures.

Although several designs (such as the Convair flying car) have flown, none have enjoyed commercial success, and those that have flown are not widely known about by the general public. The most successful example, in that several were made and one is still flying, is the 1949 Taylor Aerocar. One notable design, Henry Smolinski's Mizar, made by mating the rear end of a Cessna Skymaster with a Ford Pinto, disintegrated during test flights, killing Smolinski and the pilot.

In the 1950s, Ford Motor Company performed a serious feasibility study for a flying car product. They concluded that such a product was technically feasible, economically manufacturable, and had significant realistic markets. The markets explored included ambulance services, police and emergency services, military uses, and initially, luxury transportation. Some of these markets are now served by light helicopters. However, the flying car explored by Ford was projected to be at least fiftyfold less expensive.[citation needed]

When Ford approached the U.S. Federal Aviation Administration (FAA) about regulatory issues, the critical problem was that the (then) known forms of air traffic control were inadequate for the volume of traffic Ford proposed. At the time, air traffic control consisted of flight numbers, altitudes and headings written on little slips of paper and placed in a case. Quite possibly computerized traffic control, or some form of directional allocation by altitude could resolve the problems. Other problems would also need to be resolved in some ways, however, including intoxicated pilots or pilots that drive/fly without a license. Standards would have to be agreed upon by the international community, such as air miles being translated to nautical miles and not affecting the reading of the odometer. Furthermore, there would be serious concerns among the public in built up urban areas, that malfunctioning or incorrectly operated flying cars could crash into houses, shopping districts or pedestrian areas, severely damaging buildings or killing civilians.[citation needed] 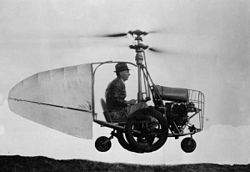 There is an active movement in the search for a practical flying car. Several conventions are held yearly to discuss and review current flying car projects. Two notable events are the Flying Car forum held at the world-famous EAA Airventure at Oshkosh, Wisconsin, and the Society of Automotive Engineers (SAE) conventions held at various cities.

The American Defense Advanced Research Projects Agency, has shown a interest in the concept with a sixty five million dollar program to develop a four place roadable aircraft by 2015. The vehicle is required to take off vertically, and have a 280 mile range. Terrafugia, AAI Corporation, and other Textron companies have been awarded the contract.[6]

Flying cars fall into one of two styles; integrated (all the pieces can be carried in the vehicle), or modular (the pieces to fly are left at the airport when the vehicle is driven).

A number of companies are developing vehicles, although few have demonstrated a full-sized vehicle capable of free flight. These include: