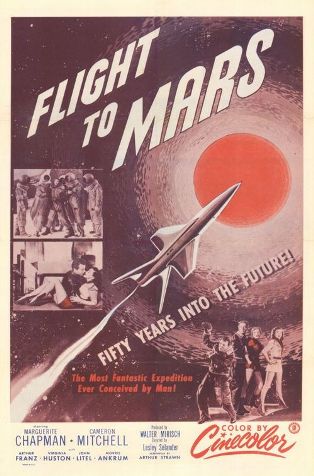 "Flight to Mars" (1951) is a , written for the screen by , produced by for (which also distributed) and directed by . The film features Cameron Mitchell, , , and as American spacemen, appeared as Alita, the leader of the human-like Martian women, and as Ikron, the leader of the Martian council.

The story involves the arrival on Mars of an American scientific expedition team, who discover an underground-dwelling, dying civilization of Martians. They are anatomically human, and are suspicious of the earthmen's motives, with the majority of the governing body finally deciding to keep the earthmen prisoner.

This film reuses almost all the cabin interior details from (Lippert Pictures, 1950, and filmed at another studio), except for some of the flight instruments. Even the spaceflight noises are reused. Similarly, the concepts of spaceflight are those postulated in that earlier film.

The space suits appear to have been adapted from those used in (Eagle Lion, 1950), even to the different suit colors.

In a sense, this film is quite derivative, adding little to the science fiction film literature.

The Wade Williams DVD appears to be made from a 16mm print. 16mm prints of Super Cinecolor features were almost always conventional Cinecolor.