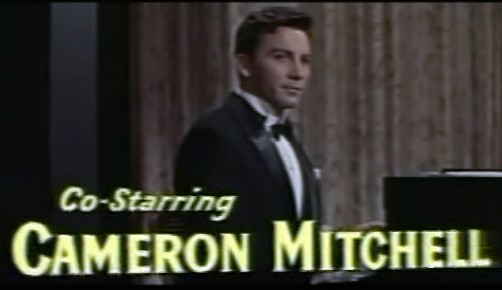 Cameron Mitchell (, – , ) was an American film, television and Broadway star with close ties to one of 's most successful families, and considered, by Lee Strasberg, to be one of the founding members of in .

Born Cameron MacDowell Mitzel in to Rev. Charles and Kathryn Mitzel, Mitchell served as a bombardier with the during . His film career began with minor roles in films dating back to 1945, but he quickly rose to young leading man status opposite such stars as in "", and in "Love Me or Leave Me", and in "", and in "", and and in "".

It was on TV where Mitchell made the greatest impact during the latter part of his career, and he is best remembered for starring as Uncle Buck in the 1960s western series, "". He had also made an appearance on an episode of "" & "", & guest starred on the short lived TV series "" in 1975.

Between the first and second world wars, during his years as a young actor in and 's , Fontanne suggested that Cameron's surname sounded "a bit too much like the Hun" and insisted he change it to "Mitchell".

In 1940, Mitchell married Johanna Mendel, the daughter of self-made Canadian business tycoon . The Mendel family was based in , where Mr. Mendel founded , a major family-owned meat packing operation.

Although Cameron and Johanna divorced in 1960, Cameron maintained close ties to his adopted second home. His daughter with Johanna, , is a Canadian actress. Another son, , is a -based actor. Yet another son, , was president of Intercontinental Packers for many years working alongside his mother, Johanna Mitchell who was Chairwoman of the Board. Today the company is known as and still operates out of Saskatoon, now owned by .

He also provided the voice of Jesus in "".

After a decades long career in radio, film and television, Cameron Mitchell died of , aged 75, on , , in . Mitchell's children from his second marriage - Jake, Jono and Kate Mitchell - live in , California.