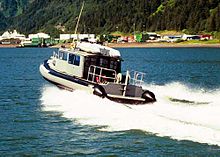 It was established in 1930 as Division of Law Enforcement, U.S. Fish Commission and Bureau .[2] It is responsible for the ecosystem protection and conservation of most of national marine life. It is the only federal agency for such. As of 2011[update], it has more than 200 employees.