Michael (known as Mike or Mick) McMahon is a British comics artist best known for his work on 2000 AD characters such as Judge Dredd, Sláine and ABC Warriors, and the mini-series The Last American.

Judge Dredd was created for IPC's new science fiction comic 2000 AD in 1977 by writer John Wagner and artist Carlos Ezquerra, but problems in pre-publication led to both creators walking out, and the first published story was written by Peter Harris and Pat Mills, and drawn by an inexperienced young artist called Mike McMahon. Mills, who was editor at the time, chose McMahon because he could do a passable imitation of Ezquerra's style, but the more he drew the more his own style emerged. His drawings became more angular and less organic than Ezquerra's; where Equerra's line was fluid, McMahon's was sharp. Before long Wagner returned to his creation, and McMahon became the character's most regular artist. Other artists, such as Ian Gibson and Brian Bolland, followed his lead, putting their own spin on the way McMahon was developing the character and his world. 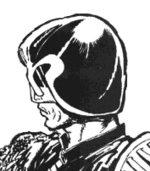 McMahon's early work was characterised by a quick, spontaneous approach that verged on the messy. His figures were lean and loose, his pen lines thrown down with verve and energy, and hatching was done with a fully charged brush. He drew the bulk of the first long-form Judge Dredd story, "The Cursed Earth", with the slower, more meticulous Brian Bolland contributing occasional episodes. 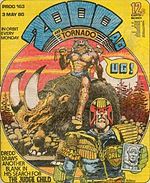 In 1979 McMahon took some time off from Dredd to draw Pat Mills's robot disaster squad Ro-Busters and its spin-off ABC Warriors, alternating with Kevin O'Neill and others, and under O'Neill's influence his work became tighter and his figures chunkier. He returned to Dredd the following year for the next long story, "The Judge Child", with a different, more considered style, and rotated with Bolland and Ron Smith. Writers John Wagner and Alan Grant gave McMahon the spookier, more atmospheric episodes to draw, and he responded with subtle lighting, texture and composition effects.

Following "The Judge Child" his art took a high contrast black and white direction, and in colour stories in annuals, explored patterns of flat colour. In 1981, when he began the Judge Dredd story "Block Mania", which he was slated to draw all nine episodes of, his drawings were tight and precise with well-defined areas of black and white. They looked fantastic, but they were taking an increasingly long time to draw, especially with all the crowd scenes the scripts called for, and McMahon bowed out after only two episodes. The story was completed by Smith, Steve Dillon and Bolland, and was followed by the 26-part "Apocalypse War", Carlos Ezquerra's triumphant return to the character he created, which he drew solo. 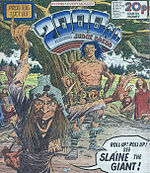 McMahon moved to Mills' new Celtic barbarian fantasy, Sláine, another story with a fraught pre-publication history, and all but disappeared from publication for nearly two years (He did draw a couple of stories for Doctor Who Magazine during this time). When he did return in 1983, it was with a radically different style, all sinuous figures, tangled pen lines, and incompletely filled in areas of black. Freed from sterile science fiction environments, he went to town on texture and tone, lashed together technology and gloriously organic backgrounds. 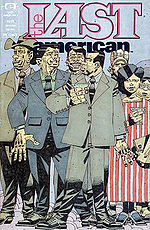 With The Last American (cover of issue 3, 1991) his work became flatter and more angular

After his last work on Sláine in 1984, McMahon did another of his vanishing and evolving acts. He re-emerged in 1991, after a long illness that prevented him from drawing, with The Last American, written by Wagner and Grant, for Marvel Comics's Epic imprint, and another radical change in drawing style. The Last American is Ulysses Pilgrim, a disgraced US Army officer placed in suspended animation on the eve of a nuclear war and authorised to restore order after it - but when he's revived he discovers there's nothing to restore order to. For four issues he searches in vain for survivors, accompanied by three slightly deranged robots, and struggling not to succumb to despair. McMahon's art is blocky, all straight, edgy lines and enclosed, flat areas of deep, vivid colour, stylised yet straight-faced, perfectly straddling the low-key realism of the story and Pilgrim's increasingly desperate mental state.

Since then he has worked in computer game design and his work in comics has been sporadic. A couple of Hellraiser stories, an Alien Legion one-off, the unfinished Mutomaniac in the short-lived weekly Toxic!, a handful of Judge Dredd-related stories, and a daring futuristic Batman story in Legends of the Dark Knight, saw him progressively simplify and flatten his style, then find new ways of introducing depth in Sonic the Comic, the miniseries Tattered Banners for DC Comics's Vertigo imprint, a return to ABC Warriors and a short Batman Black and White back-up story. During this time, he also produced two truly superb, visually striking and stunning 6 page strips for the Marvel UK/Panini fully originated fortnightly comic Rugrats (he would have been commissioned to draw more, but sadly the comic was canceled). His latest work, a Judge Dredd episode, appeared in 2000AD prog 1539. McMahon's work never sits still, but frequently goes beyond comics fans' stylistic comfort zones.

Mick McMahon's work has informed over 30 years of British Sci Fi design, and he is referenced by many influential artists as an inspiration including Mike Mignola, Jamie Hewlett and Dave Gibbons.