Cleat (shoe)
This article is about the protrusions on the soles of certain shoes. For the shoe itself, see football boot. 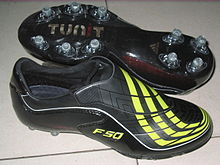 Football boots have studs on their soles

Cleats or studs are protrusions on the sole of a shoe, or on an external attachment to a shoe, that provide additional traction on a soft or slippery surface. In American English the terms cleats is used synecdochically to refer to shoes featuring such protrusions.

Unlike track spikes that appear on shoes for sports such as track and field and golf, the shoes for team sports played on grass generally have large studs on the bottom to assist in gripping the surface, preventing sliding and assisting in rapid changes of direction. The stud itself is often called a cleat. There are three main types of soccer cleats: round, hard ground, and bladed. there is also metal studded, but that is less common because they are illegal in some games.

In the United States, college football coach Joseph Pipal has been credited as one of the creators of "mud cleats" for football shoes.[1]

In Australia, the studs on Australian Rules Football boots are traditionally referred to as "stops".[2] Prior to modern molded plastic soles, these were often composed of a replaceable screw-in wooden stud.

A metal or plastic piece that attaches to the bottom of a shoe is also called a cleat, especially a cycling shoe that interfaces with a clipless pedal system.

Ice cleats or crampons are a type of spikes that usually are attachable under the soles of shoes (in such cases also called "shoe chains") to prevent slipping, especially on ice. There are several variations on the way they are mounted, sometimes with rubber bands or a fixed mount in front of the heel, making them easy to remove when not in use.