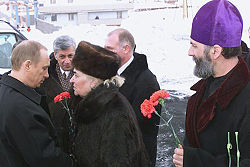 Initially, the Norillag labor force was responsible for the construction of the Norilsk mining-metallurgic complex and for mining copper and nickel. Its activities gradually expanded into virtually all economical functions of the region, from fishing to "reconstruction of the house where lived Comrade I.V. Stalin in exile".[1]

Starting from 1,200 inmates in 1935, its numbers jumped to 9,000 in 1937 (the onset of the Great Purge) and peaked in 1951 at 72500, housed in 30 camp sections. Memorial estimates the total number of its inmates over the history of the camp at 400,000, with about 300,000 being political prisoners. The geography of this camp system included the Norilsk area, including Dudinka and Kayerkan, as well as more remote places, including Krasnoyarsk and some agricultural camps in Kureyka, Atamanovo and Shushenskoye

Initially the construction activities were handled by the Norilstroy (Норильстрой), while Norillag supplied the workforce and some infrastructure.

In 1953, shortly after the death of Joseph Stalin, the Gorlag camp of Norillag system was the place of the major Gulag revolt, known as the Norilsk uprising.