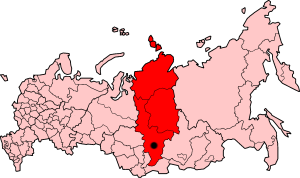 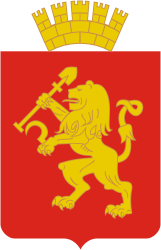 Krasnoyarsk ( _ru. Красноя́рск) is the administrative center of of , and the third largest city in . Krasnoyarsk lies on the and is an important junction on the . The city is served by . During the it was home to air base, which has been turned into apartment blocks since then. Population: 909,341 (2002 census); 912,629 (1989 census).

The city was founded in July of 1628 as a Russian border fort. The group of led by the arrived to the confluence of the with the and constructed fortifications intended to protect the frontier from attacks of native peoples who lived along Yenisei and its tributaries. In the letter to the s reported::"...The town of trunks (log buildings) we have constructed and around the place of fort, we the servants of ye, our lord, have embedded posts and fastened them with double bindings and the place of fort have strengthened mightily..."

The fort had been named "Krasny Yar" ( _ru. Кра́сный Яр) after the local Turkic name of the place it was built by: "Kyzyl Yar", meaning "Red Ore" or "Krasny Yar" in Old Russian. The name "Krasnoyarsk" was later given when the village of Krasnyy Yar had received town status.

In , 145 miles south of Krasnojarsk, was found meteorite mass of about 700 kg. It was seen by in and transported to Krasnojarsk. The Krasnojarsk meteorite is important because was the first ever studied and the first meteorite ever etched.

In the , Krasnoyarsk was one of the places to which political exiles were banished. For example, eight Decembrists were deported from St. Petersburg to Krasnoyarsk after the failure of the revolt.

After the during the periods of centralized planning ("pyatiletkas") numerous large plants and factories were constructed in Krasnoyarsk: , the dock yard, the paper factory, the hydroelectric power station (now the fifth largest in the world and the second in ), and the river port.

During the epoch of , Krasnoyarsk was a major center of the system. The most important labor camp was the or "Krasnoyarsky ITL" (1938-c.1960) with the two units located in and . In the city of Krasnoyarsk itself, the or "Yeniseysky ITL" labor camp was prominent as well during (c.1940-41).

During World War II dozens of factories were evacuated from and ern to Krasnoyarsk and nearby towns, stimulating the industrial growth of the city. After the war additional large plants were constructed: the aluminum plant, the metallurgic plant, the plant of base metals and many others.

In the late 1970s, the began constructing a station at Abalakova, near Krasnoyarsk, which allegedly violated the . Beginning in 1983, the demanded its removal, until the Soviet Union admitted the radar station was a violation in 1989. Equipment was slowly removed from the site and by 1992 it was officially declared to be dismantled. The equipment from the site was likely relocated to a new site near . [ [http://www.globalsecurity.org/wmd/world/russia/yeniseysk.htm Yeniseysk (Krasnoyarsk) ] ]

After the and beginning of the many large plants and factories, such as the , many became owned by alleged criminal authorities and s while others were declared bankrupt. The economic transition resulted in a dramatic raise in and numerous strikes.

The best known financial scandal of the second half of 1990s happened when ownership of the by a known Krasnoyarsk businessman had been cancelled after he was accused of murdering his partner, . The accusation eventually turned out to be false.

The Krasnoyarsk plants ownership problems continue through the early 21st century since nearly all of them are owned either by monopolistic financial groups or by s.

Since the election of as the mayor of Krasnoyarsk in 1996, the city's appearance has slowly improved. Old historical buildings have been restored, asphalt walkways have been replaced with paving-stone, and numerous squares with fountains have been constructed. Now the majority of the city bears only a few traces of its pragmatic Soviet look.

The first version of the Krasnoyarsk coat of arms was approved on , . The coat of arms was divided horizontally into two parts, the upper part containing the coat of arms of the , and the lower part picturing the on a silver background.A revised coat of arms, approved on , , had the golden figure of a lion placed on a red heraldic shield with a spade in the right fore paw and a sickle in the left fore paw, both made of the same metal. The shield was topped with the golden crown of the .The current coat of arms (see above) approved on , contains the same red shield with a slightly changed figure of the lion topped with the golden five-tower status crown of a federal subject center. In 2005, a m to ft|16 tall pillar with a bronze statue of the Krasnoyarsk heraldic lion upon its top was erected at the square.

The flows from to through the city. Due to the km to mi|32 upstream, the Yenisei never freezes in winter and never exceeds C to F|14 in summer through the city. Near the city center, its altitude is m to ft|136 above . There are several islands in the river, the largest of which are Tatyshev and Otdyha Isles, used mainly for recreation.

To the south and west, Krasnoyarsk is surrounded by forested hills averaging m to ft|410 in height above river level. Further south are the gigantic rock cliffs of the Nature Reserve rising from the surrounding hills. The western hills form the , starting from the (notable for its tracks) and extending westwards up to the . The terrain north of town is rather plain, with forests to the northwest and agricultural fields to the north and east.

Due to the specifics of the relief, few natural lakes exist in the Krasnoyarsk neighborhood.

The population of Krasnoyarsk includes a number of peoples, the most numerous are , , , , and . Lately the number of , and other n and Caucasian peoples has grown extensively because of the vast, often illegal in search for work.

Another populous group is the Chinese who, unlike other s, are employed in much more lucrative areas and often form business partnerships with local companies. Many Chinese trade at the s, and there is even a special large Chinese named "Sodruzhestvo" (Russian for "fellowship"), and the "Chinese Trading Town" (known in Russian as Китайский торговый город) or colloquially "" situated at Strelka.

On the top of the Karaulnaya hill, originally a pagan shrine, later occupied by the Krasnoyarsk fort watchtower, the St. Paraskeba Chapel ( _ru. Часовня Параскевы Пятницы, 1804, rebuilt in 1854 to 1855) still stands. The chapel, displayed on the 10-ruble note, is one of iconic images of the city. The chapel was abandoned and fell into disrepair during the Soviet era and only when the came it had been regained by the Yenisei .

Another unofficial symbol of Krasnoyarsk is the incomplete 24 storey tower located at Strelka. Construction of the tower had been started just before and then frozen due to the administrative crisis. The outline of the tower is clearly seen from many places in the city.

A bridge near Krasnoyarsk carries the across the . This structure, one of the longest at the time, was constructed between 1893 and 1896 to an award-winning design by . When approved for the inscription on the in 2003, the bridge was described by the as "an early representation of a typical parabolic polygonal in Russia" which became "a testing ground for the application of engineering theories and the development of new innovative solutions, which had numerous successors" ( [http://whc.unesco.org/p_dynamic/document/document_download.cfm?id_document=1441] ).Among other notable buildings are the mansions of the merchant (beginning of the 20th century), the Roman-Catholic Transfiguration Chapel ( _ru. Преображенский собор, 1911, also known as the Krasnoyarsk Organ Hall), the stylized as an ian temple, the and the triumphal arch at the Spit (2003), the flanked with two towers known as the "Donkey Ears".There are a number of 2-storey wooden houses in the city built mostly in the middle of the 20th century as temporary habitations. Many urbanized villages located inside the city keep the remnants of the traditional Russian village architecture: wooden houses with backyards, many somewhat dilapidated now but still inhabited.

There are a number of local holidays celebrated annually in Krasnoyarsk. The most significant holiday is the "Day of the City" celebrated in June, usually with the . Other holidays and cultural events are: the "Mana Festival" ( _ru. Манский фестиваль) usually held on last weekend in June with the traditional bard contest, the traditionally held in the , the "Museum Night" festival dedicated to the (), the "Jazz on Yenisey" festival, the "Stolbist Day" held many times a year celebrating the traditions of in the national reserve, the "Bikers' Rally".

Krasnoyarsk has a number of local companies and the highly-developed s, many districts of the city have LAN-based broadband access.

The city is also home to the a world-renowned choir that tours in many countries as .

Next to , Krasnoyarsk is a very prominent scientific and educational center of , with over 30 facilities, many of which are the branches of the , and about 200 s. The most notable institutes are:

Like , Krasnoyarsk has a special city district called Akademgorodok ("Academic Town" in Russian) where several educational institutes are located. Krasnoyarsk's is known for a 1973–1985 experiment on ecological isolation of beings (the "").

There are several museums in Krasnoyarsk. Krasnoyarsk zoo is a major attraction for residents and tourists.

An underground system (three lines) has been in planning and construction phases in Krasnoyarsk for decades. The first three stations have not been opened yet, but several construction sites around the city are visible. The system is expected to be finally opened in 2010-2012.

Krasnoyarsk lies on the Yenisei River and historically has been an important junction on the .

Krasnoyarsk is served by , located 37 km northwest of the city.

The most popular place of attraction for tourists visiting Krasnoyarsk is the huge national nature reserve ("Pillars" in Russian) or the "Rock Pillars". covers an area of 470 km² (181 mile²) with numerous giant rocks formations up to 100 meters high, many of very extraordinary shapes. Stolby is also a major location, many local climbers intentionally do not use any ing equipment and call their extreme sport "", which is known around the world as solo climbing.

Other popular showplaces include the dam, the with the , museums, theaters, etc.

Krasnoyarsk is the former home of the , which has since relocated to . Some of Russia's international rugby matches are played at Central Stadium, in Krasnoyarsk.

compete in the , the third tier of professional football in Russia.