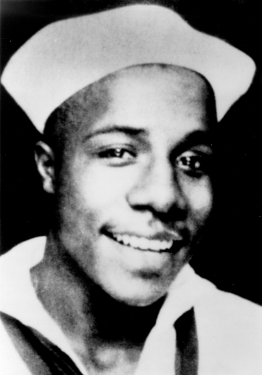 Born in Ithaca, New York, in 1921, Haley spent his first five years in in an family with his 2 younger brothers. Haley was born to Simon Haley and Bertha Palmer. Many of his books reference his childhood friend Charlie Taylor. Haley's father, , was a professor of agriculture who had served in after graduating from college. The younger Haley always spoke proudly of his father and the incredible obstacles of he had overcome. Alex Haley was first sent off to college at the age of 15. At the age of seventeen he returned home to inform his father of his withdrawal from . Simon Haley felt that Alex needed discipline and growth and convinced his son to enlist in the military when he turned 18. On May 24, 1939, Alex Haley began his 20-year service with the Coast Guard.

He enlisted as a mess-boy and then became a in the rate of Mess Attendant, one of the few enlisted designators open to African Americans at that time. It was during his service in the that Haley taught himself the craft of writing stories. It is said that during his enlistment he was often paid by other sailors to write love letters to their girlfriends. He talked of how the greatest enemy he and his crew faced during their long sea voyages wasn't the Japanese but boredom. He collected many rejection slips over an eight-year period before his first story was bought.

After , Haley was able to petition the Coast Guard to allow him to transfer into the field of journalism, and by 1949 he had become a in the rating of Journalist. He later advanced to the rank of and held this grade until his retirement from the Coast Guard in 1959.

Alex Haley's awards and decorations from the Coast Guard include the (with "Sea" clasp), , , , , Coast Guard Good Conduct Medal (with 1 silver and 1 bronze ), , , , and the Coast Guard Expert Marksmanship Medal.

After his retirement from the Coast Guard, Haley began his writing career and eventually became a senior editor for "Reader's Digest".

Haley conducted the first interview for "" magazine. The interview, with jazz legend , appeared in the September 1962 issue. In the interview, Davis candidly spoke about his thoughts and feelings on and it was that interview that set the tone for what became a significant feature of the magazine. 's "Playboy" Interview with Haley was the longest he ever granted to any publication. Throughout the 1960s, Haley was responsible for some of the magazine's most notable interviews, including an interview with leader , who agreed to meet with Haley only after Haley, in a phone conversation, assured him that he was not Jewish. Haley remained calm and professional during the interview even though Rockwell kept a handgun on the table throughout it. Haley also interviewed , who spoke about changing his name to . Other interviews include 's defense attorney , , , , and . He completed a memoir of Malcolm X for "Playboy" six months before Malcolm X died in February 1965. The memoir was published in the July 1965 issue of the magazine.

One of Haley's most famous interviews was a 1963 interview with for "Playboy", which led to their collaboration on the activist's autobiography "", based on s conducted over the course of two years prior to Malcolm's death (and with an epilogue). Published in 1965, the book sold well and was later named by "Time" magazine as one of the ten most important nonfiction books of the 20th century.

In 1976, Haley published "", a novel based loosely on his family's history, starting with the story of , kidnapped in Gambia in 1767 and transported to the to be sold as a slave. Haley claimed to be a seventh-generation descendant of Kunta Kinte, and Haley's work on the novel involved ten years of research, intercontinental travel and writing. He went to the village of , where Kunta Kinte grew up and which is still in existence, and listened to a tribal historian tell the story of Kinte's capture. [ [http://www.tnstate.edu/library/digital/Haley.htm ALEX HALEY (1921-1992)] ] Haley also traced the records of the ship, "The Lord Ligonier", which he said carried his ancestor to America. Genealogists have since disputed Haley's research and conclusions and Haley made an out-of-court settlement with , who had sued him for plagiarism.

Haley was briefly a "writer in residence" at in Clinton, . He began to write "Roots" there. Many local people remember Haley fondly. He enjoyed spending time at a local bistro "The Savoy" in Rome New York where he listened to the piano player. Today, there is a special table in honor of Haley with a painting of Alex writing "Roots" on a yellow legal tablet.

Haley said the most emotional moment of his life was on September 29, 1967, when he stood at the site in Annapolis, where his ancestor had arrived 200 years before. "Roots" was eventually published in 37 languages and Haley won a Special Award for it in 1977 from the Pulitzer Board. Roots was also made into a popular television miniseries that year. The film reached a record-breaking 130 million viewers when it was serialized on television. "Roots" emphasized that African Americans have a long history and that not all of that history is lost, as many believed. Its popularity sparked an increased public interest in , as well.

In 1979, ABC aired the sequel miniseries "", which continued the story of Kunta Kinte's descendants, concluding with Haley's arrival in Jufureh. Haley was portrayed (at various ages) by future soap opera actor , "" actor Damon Evans, and winner .

In the late 1980s, Haley began working on a second historical novel based on another branch of his family, traced through his grandmother Queen&mdash;the daughter of a black slave woman and her white master. Haley died in of a heart attack with the story unfinished and was buried beside his childhood home in . At his request, it was finished by and was published as ""; it was subsequently made into a movie in 1993.

Late in his life, Haley acquired a small farm in , adjacent to the , with the intent of making it his home. Subsequent to his death, the property was sold to the (CDF), which calls it the "Alex Haley Farm" and uses it as a national training center and retreat site. An abandoned on the farm property was rebuilt as a traditional ed barn, using a design by . The building now serves as a library for CDF. [" [http://www.museumofappalachia.com/Newsletter%20June%202006.pdf Museum staff members visit Alex Haley Farm] ", "Museum of Appalachia Newsletter", June 2006]

The main galley at the U.S. Coast Guard Training Base At is named "Haley Hall" in his honor.

In 1999, the U.S. Coast Guard honored Haley by naming the cutter "Alex Haley" after him.

Haley was also posthumously awarded the from the government of ten years after his death. This award, created in 1999, did not exist during Haley's lifetime.

Plagiarism and other criticism

Alex Haley claimed he spent ten years researching his heritage for his historical novel, "Roots", which in 1977 was adapted as a TV miniseries. That same year he was awarded a and the for the book, but a year later his reputation was marred by an accusation of . After a trial, Haley settled out-of-court for $650,000, having been accused of plagiarizing more than 80 passages from "The African" by . [cite news|author=Fein, Esther B.|title=Book Notes|work=|url=http://select.nytimes.com/gst/abstract.html?res=F00613FC3E580C708CDDAA0894DB494D81|date=1995-03-19] Haley claimed that the appropriation of Courlander's passages had been unintentional. [cite news|author=Crowley, Anne S.|title=Research Help Supplies Backbone for Haley's Book|work=|url=http://pqasb.pqarchiver.com/chicagotribune/access/25059144.html?dids=25059144:25059144&FMT=ABS&FMTS=ABS:FT&type=current&date=Oct+24%2C+1985&author=Anne+S+Crowley%2C+Associated+Press&pub=Chicago+Tribune+(pre-1997+Fulltext)&edition=&startpage=10.H&desc=RESEARCH+HELP+SUPPLIES+BACKBONE+FOR+HALEY%27S+BOOK|date=1985-10-24] In 1978, Courlander went to the U.S. District Court of the Southern District of New York, charging Haley with plagiarism of "The African". Courlander's pre-trial memorandum in the copyright infringement lawsuit stated: "Defendant Haley had access to and substantially copied from "The African". Without "The African", "Roots" would have been a very different and less successful novel, and indeed it is doubtful that Mr. Haley could have written "Roots" without "The African". . . . Mr. Haley copied language, thoughts, attitudes, incidents, situations, plot and character."

In his report submitted to the court in this lawsuit, Professor of English and expert witness on plagiarism, Michael Wood of Columbia University, stated: "The evidence of copying from "The African" in both the novel and the television dramatization of "Roots" is clear and irrefutable. The copying is significant and extensive....Roots...plainly uses The African as a model: as something to be copied at some times, and at other times to be modified; but always, it seems, to be consulted. . . . "Roots" takes from "The African" phrases, situations, ideas, aspects of style and of plot. . . . "Roots" finds in "The African" essential elements for its depiction of such things as a slave's thoughts of escape, the psychology of an old slave, the habits of mind of the hero, and the whole sense of life on an infamous slave ship. Such things are the life of a novel; and when they appear in "Roots", they are the life of someone else's novel."

After a five-week trial in federal district court, Courlander and Haley settled the case, with Haley making a financial settlement and a statement that "Alex Haley acknowledges and regrets that various materials from "The African" by Harold Courlander found their way into his book "Roots"."

During the trial, Alex Haley had maintained that he had not read "The African" before writing "Roots". Shortly after the trial, however, Joseph Bruchac, an instructor of black literature at Skidmore College, came forward to swear in an affidavit that in 1970 or 1971 (five or six years before the publication of Roots) he had discussed "The African" with Haley and had, in fact, given his "own personal copy of "The African" to Mr. Haley."

Haley has been accused of fictionalizing true stories in both his book "Roots" and "The Autobiography Of Malcolm X". Malcolm X's family and members of The accused Haley of changing selected parts of his story.

In addition, the veracity of those aspects of "Roots" which Haley claimed to be true has also been challenged. [Nobile, Philip. "Uncovering Roots", "", February 23, 1993; pp. 31-38] Although Haley acknowledged the novel was primarily a work of fiction, he did claim that his actual ancestor was Kunta Kinte, an African taken from the village of in what is now . According to Haley, Kunta Kinte was sold into slavery where he was given the name "Toby" and, while in the service of a slavemaster named John Waller, went on to have a daughter named "Kizzy", Haley's great-great-great grandmother. Haley also claimed to have identified the specific slave ship and the actual voyage on which Kunta Kinte was transported from Africa to North America in 1767.

However, genealogist and historian Gary B. Mills revisited Haley's research and concluded that those claims of Haley's were not true. [Mills, Gary B. and Elizabeth Shown Mills. "Roots" and the New 'Faction': A Legitimate Tool for CLIO?", "Virginia Magazine of History and Biography", January, 1981] [Mills, Gary B. and Elizabeth Shown Mills. "The Genealogist's Assessment of Alex Haley's "Roots", "National Genealogical Society Quarterly", March, 1984] According to the Millses, the slave named "Toby" who was owned by John Waller could be definitively shown to have been in North America as early as 1762. They further said that Toby died years prior to the supposed date of birth of Kizzy. There have also been suggestions that Kebba Kanji Fofana, the amateur in Jufureh, who, during Haley's visit there, confirmed the tale of the disappearance of Kunta Kinte, had been coached to relate such a story. [MacDonald, Edgar. "A Twig Atop Running Water -- Griot History", "Virginia Genealogical Society Newsletter", July/August, 1991] ["The Roots of Alex Haley". Documentary. Directed by James Kent. Bookmark, 1996] .

To date, Haley's work remains a notable exclusion from the "Norton Anthology of ", despite Haley's status as history's best-selling African-American author. professor Dr. , one of the anthology's general editors, has denied that the controversies surrounding Haley's works are the reason for this exclusion. Nonetheless, Dr. Gates has acknowledged the doubts surrounding Haley's claims about "Roots", saying, "Most of us feel it's highly unlikely that Alex actually found the village whence his ancestors sprang. "Roots" is a work of the imagination rather than strict historical scholarship." [Beam, Alex. "The Prize Fight Over Alex Haley's Tangled 'Roots'", "", October 30, 1998]