Swarf
This article is about the manufacturing waste. For the English band, see Swarf (band). For the archaic term for waste oil or grease, see Swarfega. 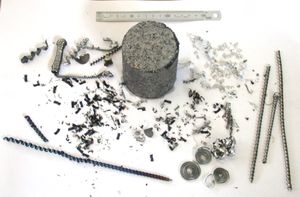 Various examples of swarf, including a block of compressed swarf

Swarf, also known as turnings, chips, or filings, are shavings and chippings of metal — the debris or waste resulting from metalworking operations including milling and grinding. It can usually be recycled, and this is the preferred method of disposal due to the environmental concerns regarding potential contamination with cutting fluid or tramp oil. The ideal way to remove these liquids is by the use of a centrifuge which will separate the fluids from the metal, allowing both to be reclaimed and prepared for further treatment.

The terms "swarf" and "chips" are also used to describe the waste shavings, sawdust, and cuttings from woodworking operations, as well as waste in constructed piping, such as welding metal or slag waste that is produced and trapped within the pipe during its assembly, and sometimes in masonry.[1]

Chips can be extremely sharp, and this creates a safety problem, as they can cause serious injuries if not handled correctly. Depending on the composition of the material, it can persist in the environment for a long time before degrading. This, combined with the small size of some chips (e.g. those of brass or bronze), allows them to disperse widely by piggy-backing on soft materials and also to penetrate the skin as deep splinters.

It is standard training for machinists, and usually a standing workplace rule, to avoid handling swarf with bare hands. Machinists generally adhere to this guideline to the extent practical. Although it isn't uncommon for machinists to touch swarf, it's always a risk-prone behaviour. There are some machining applications in which total avoidance of touching swarf is considered burdensome or impractical by the machinist, but employers should not expect or require that workers do it. Any machining textbook or manufacturing business insurance policy will insist that this not be done.

Similarly, it is also standard training for machinists, and usually a standing workplace rule, to minimize or entirely avoid blowing chips away with compressed air, but as with the avoid-handling rule, this rule is often broken, and there are some machining applications in which total avoidance of chip-clearing via air hose is considered burdensome or impractical by the machinist. Some machine tool manuals proscribe this practice both for safety and for the preservation of way wipers and bearing seals. Alternatives to blowing chips away include vacuuming them away with an industrial vacuum (shop vacuum); gently washing them away with a coolant hose discharging at typical garden-hose pressure values; or preventing their generation in the first place (for example, forming threads instead of cutting them).

It is not uncommon for chips flying off the cutter to be ejected with great force and to fly several meters. These flying chips present a hazard that is deflected with safety glasses, face shields, and other personal protective equipment, as well as the sheet-metal enclosures (and polycarbonate windows) that surround most commercial CNC machine tools.

Optimum cutting efficiencies often generate long spring-like swarf. This is hard to deal with as it is bulky and can clog the nozzle of a shop vacuum. Clean-up and disposal of this continuous-cutting swarf is made simpler by using a cutting tool with a chip-breaker. This results in denser, more manageable waste.

Disposing of swarf is a tedious but necessary task. For ease of transport and handling, swarf may be compressed into bricks, which greatly reduces associated problems with storing and cost; it also improves material handling for all concerned with its reclamation and recycling.

Recycling chips rather than putting them in the garbage stream (headed to landfilling or incineration) has various advantages:

Machine shops are typically required by the scrap collector to: