Plus One was an American Christian pop band from the 2000s.

Plus One enjoyed their greatest success with the release of their debut album, The Promise, which featured the hits "Written on My Heart" and "God Is in This Place".

Plus One, was formed by Mitchell Solarek, a manager who was unhappy with the overtly sexual trend in boy and girl groups. After meeting Nate Cole at a talent show in California, he decided to recruit him for a new kind of boy group. He then went looking for the rest of the group’s members. Drawn from a talent pool numbering in the thousands, each member of Plus One hails from a different part of the United States. Jeremy Mhire comes from Springfield, Missouri, Gabe Combs, like Cole, is from California, Jason Perry comes from Madison, Indiana, and Nathan Walters was born in Atlanta, Georgia. The name Plus One refers to the members of the group, plus God. The idea of forming a Christian boy band was the bright idea of an executive at Atlantic Records, because of the success of such secular bands as 'N Sync and Backstreet Boys. Auditions were held, and these 5 young men, who were all raised in the Assembly of God Church, three of them being Pastors' sons, came together and melded as a group, all firmly believing that the Lord had brought them together to be in Christian ministry, to do great things for the Gospel. 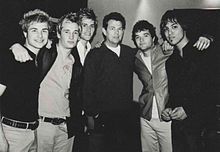 Their successful debut album, The Promise, was released in May 2000, and enjoyed great success in the Christian Pop scene. The Promise went gold with more than 500,000 album sales. Grammy Award Winning Producer David Foster was one of the producers on Plus One's albums. They had two No. 1 Christian radio hits, "Written on My Heart", which was # 1 on the charts for two months, and "God Is in This Place" followed by "Last Flight Out" and "Here In My Heart". They found themselves touring with such Christian Artists as Jaci Velasquez, Rachael Lampa, and Stacie Orrico. In 2000, they appeared in an episode of hit soap opera Days of Our Lives to perform on the show. They performed with Monica on ABC's Christmas Eve special, "'Twas the Night Before Christmas". In addition, Plus One was featured as one of the new artists of 2000 on TNN's annual television special, "Class of 2000." They gave performances at the Democratic Convention of 2000, and several major league sporting events including games with the Los Angeles Lakers, Chicago Bulls, and Atlanta Hawks. The band was featured on Teen Magazine Online and performed at Atlanta Fest and the Raggedy Ann Festival in Arcola, IL, as part of their tour schedule. The following year in 2001, they appeared as juvenile kids who form a group while in jail on the TV series Touched by an Angel and they were nominated for a Dove Award as New Artist of the Year. The group recorded a soundtrack called "I Need a Miracle" from the Christian Bible-based film Left Behind: The Movie released in 2000 followed by "With All Your Heart" was also included on the soundtrack of the Warner Brothers film, Pokémon: The Movie 2000. They also appear on Natalie Grant's album Stronger with the song "Whenever You Need Somebody" in 2001. They also covered the American patriotic song "America the Beautiful" and they performed in Luis Palau Festival in 2001.

Plus One performing their Obvious Tour in 2002

Returning from the Promise tour, Plus One went back into the studio. Helped once again by some of the top producers in the music business, including Peter Zizzo, Peter Kipley, and Matthew Gerrard, the group recorded songs for a new album, this time including some of their own material, tracks like "Use Me," "Under the Influence", "Kick Me," and "Going Crazy". A strong beat and guitar riffs defined these new tracks, distinguishing them from the lighter sound of the group's first recording. Obvious was released in February of 2002, and sold twice as many copies in its first week of release as Promise had. It hit the number-one spot on the Christian charts immediately. Three of the album's tracks, "Camouflage," became hit single occupying spots on the top-ten Christian radio charts simultaneously followed by "I Don't Care" and "Let Me Be The One". In the fall of 2002 in their Obvious Tour, Plus One released Christmas a collection of Christmas music in time for the holiday season. In addition their own renditions of "Silent Night," "O Little Town of Bethlehem,"What Child Is This? "O Holy Night" and other Christmas standards, the album included some original compositions as well, including the opening track, "This Is Christmas," and "I Won't Forget This Christmas" and a merry and charming song titled "Our Christmas Prayer."

The New Plus One in 2003 recording their new sound

In 2002, after completing touring for their Obvious tour, two members of Plus One, Jeremy Mhire and Jason Perry were called to other ministries and obligations leaving the band with the remaining three members to carry on Plus One's music ministry. In 2003, the band was dropped from the label. Seeking to revamp their image, they signed a deal with Inpop Records and released their third album, Exodus. Co-produced by former Newsboys frontman Peter Furler and keyboardist Jeff Frankenstein, Exodus marked a departure from the boy band image featuring guitars and the band performing their own material for the first time. "Be Love" is the hit single on this album followed by "Circle" and their own renditions of "Here I Am to Worship".

In 2004, after completing the "Exodus 04" tour, Plus One quietly parted ways with Inpop and with each other, In September 23, 2004, Nate Cole recently announced that Plus One will most likely be breaking up. Plus One has been taking a break for a while now, but now he's announced that this break is permanent. Nate Cole and Gabe Combs went on to form Indie rock band Castledoor with their wives Liska Cole and Coury Combs. In 2008, Nathan Walters went on to pursue a solo career releasing one album called Escape in Nashville, TN. After Castledoor, Nate Cole and his wife Liska Cole started a duo rock n' roll band called Doom and Gloom they recorded a couple of songs. This year Gabe Combs and Nathan Walters started a music production called Multitone Musik to reunite once again to merge their production and songwriting skills.