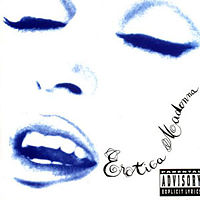 "Erotica" is a about sexuality and relationships. Each track explores a different facet of sexuality, usually involving sexual relationships. Lyrically, the album does not tie sex and sexual relationships with the traditional ideals of romance. A dance record by all accounts, the album showcases hip hop and jazz-affected club production from co-producers and André Betts. It is interesting to note that the song "In This Life" is based on 's "Prelude No. 2".

Madonna's intentions were that the album would be an accompaniment to her book "Sex", which share the same cover photograph - a colored reverse negative of Madonna's face done à la , from whom Madonna found much inspiration during her so-called "Erotica period" (for example, her "Erotica" and "" videos were shot in near identical style to many of Warhol's films, with Madonna paying obvious homage to in the latter). The photos included in the album's liner notes also come from the Steven Meisel Studio photographs shot for the "Sex" book.

The album is Madonna's first album to bear a "Parental Advisory" label (the only other albums to do so being 2003's "" and 2007's live concert album, "The Confessions Tour"). A separate "clean" version was released, the only difference being the omission of the sexually explicit "Did You Do It?".

Originally, "Bad Girl" was planned as the second single from the album with an X-rated video to match the '"Erotica" single, but it was changed due to the backlash of the "Sex" book and instead it was released as the third single. Madonna performed "Erotica", "Fever", "Bye Bye Baby", "Deeper And Deeper", "Rain", "Why's It So Hard" and "In This Life" on her 1993 .

Early versions of some of the songs on the album, as well as demo versions of songs that were not included, were included in - a collection of songs registered during the album development stage.

Originally, the album was to feature completely different artwork. refused to use it, as it was too explicit. The original image is now seen in the final inlay sleeve of the album; Madonna licking a whip.

The final image used is identical to the "Sex" book foil cover; if you place the CD on the cover it is the same size and fits perfectly. Up until near the release date, the finished artwork did not include any writing on the cover. At the last minute a "Madonna" font sticker was added to the bottom right corner using the same font as the "Bad Girl" single.

The completed track listing was not what Madonna originally had planned, if the press information is to be believed:
#"Erotica"
#"Waiting"
#"Rain"
#"Deeper and Deeper"
#"Thief of Hearts"
#"Bad Girl"
#"Why's It So Hard"
#"Where Life Begins"
#"In This Life"
#"Words"
#"Bye Bye Baby"
#"Secret Garden"
#"Goodbye to Innocence"
#"Fever". [ [http://www.madonnatribe.com/news/modules.php?name=News&file=article&sid=159 Madonna Tribe News - Erotic-a(lmost) ] ]

"Did You Do It?" does not appear and "Goodbye to Innocence" was included on the various artists compilation, "Just Say Roe". The catalogue number for this track listing is the Parental Advisory version.