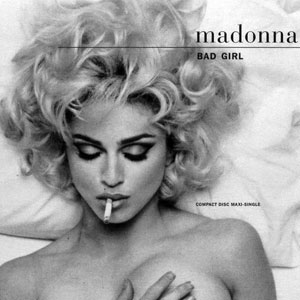 "Bad Girl" is a song by Madonna, released as the third single taken from her album "Erotica" in 1993.

The single marked a shift in fortunes for Madonna, as it was only her second single since not to chart in the top twenty in the US, stalling at thirty-six on the Billboard 100. In the UK, it managed to reach number ten, and it peaked at number five in Canada. The B-side of the US 7" release was Madonna's cover of "Fever" while the B-side of the UK 7" release was a dub of "Erotica".

Madonna performed "Bad Girl" live on "" in January 1993. At the end of the song she tore up a picture of , telling the audience to "fight the real enemy!" This was a spoof of 's controversial SNL appearance a few months earlier in which she had done the same to a picture of .

A demo version of the song (titled "Cheat") leaked on the internet in late November 2007 - see .

The storyline in the video was influenced by the book and film "". It features Madonna as "Louise Oriole," a high-powered Manhattan female executive who is an and has a penchant for one-night stands with many different men (from affluent s to shady s). She behaves this way in order to try to deal with her depression and sadness over a relationship with someone she loves deeply, but ultimately has no future. Through her days, Louise gets distracted by cigarettes, cocktails, and random hook-ups, as lamented in the song's lyrics. plays her guardian angel, who watches over her activities and delivers Louise with a "kiss of death" before her final encounter with a man who strangles her with her . The video is considered a masterpiece that resembled more a short film than a music video.

It was directed by and filmed in from -18, . Madonna's look in the video is reminiscent of her character in the film "Body of Evidence", which had just been released.

It is worth noting that the name "Louise" is Madonna's middle name. She previously had gone by the nickname "Lulu" as well, which she stated in an interview with that she used to register for hotel stays.