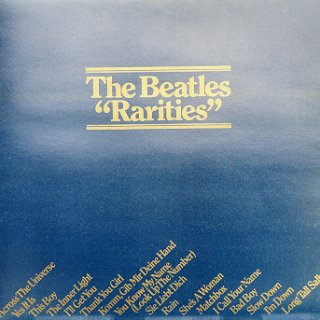 
"Rarities" is a British featuring a selection of songs by . The album was originally released as part of "", a box set featuring all other Beatles records, but was later released individually. The album has not been released on CD, but 13 of the tracks are available on the "" CD and the four other tracks on the "" CD. This article covers the British version of the album - as released as part of "The Beatles Collection" and later separately in the UK. The 1980 American album also of the same name is chronicled in .

"Rarities" was conceived to include lesser known songs that were not included on any other original Beatles album - these included of singles, two German language recordings, the tracks from an EP with exclusive material, a song recorded for the American market and a version "Across the Universe" that had previously appeared on a charity record.

The album was released , in Britain, , in America, as part of "". It was also issued in , in Britain individually.

All songs written by and except where indicated. Songs are in mono unless indicated as stereo.