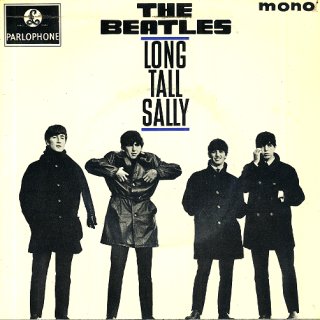 "Long Tall Sally" by was their fifth official EP release, and the first " compilation.

was written by and , a song they originally gave to and his backing band the Dakotas. Kramer released it as the B-side to "", a song that Kramer took to number 1.

*In , the first two tracks and the name of the EP were included on "".

*In 1976, the four tracks on this EP were issued as part of the double-album, "Rock 'N' Roll Music", a collection of 28 classic recordings. With the release of this album, these four tracks were finally issued in Stereo on a British-released album for the very first time.

*In 1978, the tracks were included in the UK LP "Rarities" which was first released as part of "", then individually in the UK, with all four of these songs appearing in Monophonic sound. The U.S. version of "Rarities" was different and did not include any of the "Long Tall Sally" EP songs.

*The EP was compiled with Beatles singles in the late 1980s as part of the "Past Masters" collection, which made all of the Beatles' releases available on when added to the 13 original British s. Once again, these four songs were in Stereo.

*The EP was reissued in 1992 as part of a 15-disc "Compact Disc EP Collection", with the songs in their original Monophonic sound.

*In , issued a 4-disc CD boxed set, entitled "". The set included reissues of the first 4 American Capitol albums on Compact Disc for the very first time. The songs "Long Tall Sally" and "I Call Your Name" were on disc 2, with "Slow Down" and "Matchbox" on disc 3. All of the songs on the CDs were presented in both Monophonic AND Stereo.