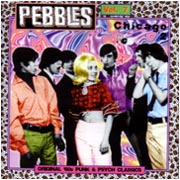 "Pebbles, Volume 7" is a among the CDs in the ; it is subtitled Chicago 2. The previous CD in the series, "Pebbles, Volume 6" also features bands from , as does the LP "".

This album was released on in 1994 as #AIP-CD-5024. Despite the similar catalogue number, there is no relation between the tracks on this CD and the tracks on the corresponding LP.

The Ides of March had a hit song with "Vehicle", and another of their early songs, "Roller Coaster" was included on the "Pebbles, Volume 10" LP. had a regional Midwest hit with "Sugar and Spice" that reached #49 on the national charts; this cut is the flip side. is just one of many similar band names (including Gary and the Nite Lites, the Light Nites, and the Knight Lights) used by this inter-racial band before renaming themselves and hitting pay dirt with "Bend Me, Shape Me" in 1968. The better-known "A" side of the single by , "Need a Little Lovin'" is included on the "Pebbles, Volume 6" CD. of later joined , while of this band was also in the Flock. The final cut is a cover of one of the strangest hit songs of the 1960's, originally released by .

Besides information on the bands and specific tracks on the album, the liner notes for this album include an essay by on "Chicago Rock".

*NOTE: The back tray card and of the CD incorrectly list "Ben Franklin's Almanac" by as the third track on this CD.