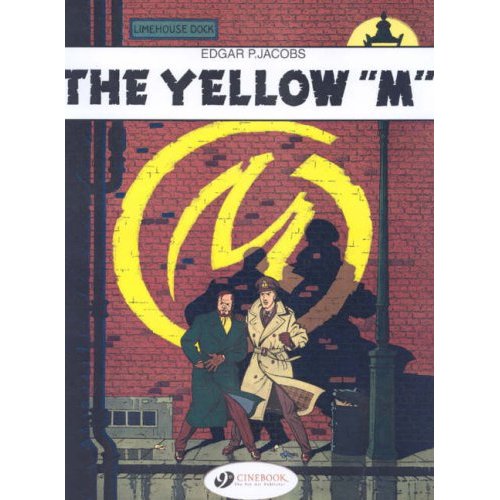 "The Yellow "M"" ( _fr. La Marque Jaune) by the Belgian artist is the sixth in the "" series, first published in Tintin Magazine between and . It first appeared in album format in .

London is terrorised by the Yellow M, an enigmatic criminal, and London's police are at a loss, so Blake calls Professor Mortimer in to help solve the case.

is being terrorized by an enigmatic villain; the only mark he leaves behind is the symbol of a yellow "M". When the is stolen from the , the assign Captain Blake to assist with their inquiries. Blake calls in his old friend, Professor Mortimer, to assist him. Meeting at the Centaur Club, Mortimer is also introduced to some of the club's regulars: Leslie Macomber, editor of the ""; Sir Hugh Calvin, judge at the Central Criminal Court; Professor Robert Vernay of the and Dr Jonathan Septimus of the Psychiatric Institute. Following dinner the group break up with Vernay and Septimus electing to walk home. On the way Septimus feels ill and calls a taxi, leaving Vernay alone; shortly afterwards, Vernay is abducted by the Yellow "M".

The following night Macomber is kidnapped and the day after, Calvin. Septimus is warned that he is next and agrees with Blake's suggestion that he leave London. Taking a train from King's Cross, their journey is unexpectedly stopped; Blake goes to investigate but, returning to their compartment, discovers Septimus has disappeared. Suddenly their train collides with the Harwich Express and is derailed. Meanwhile, Mortimer, conducting research into the affair, has become interested in "The Mega Wave", a book over which a case was fought and with which Macomber, Calvin, Vernay and Septimus were involved.

Visiting the to find a copy of "The Mega Wave", Mortimer is confounded by the Yellow "M", who steals the library's copy of the book from under his nose. That night a mysterious masked figure breaks into Blake and Mortimer's house. Awoken, the occupants confront the intruder but he is resistant to bullets and when Nasir the manservant attempts to seize him, he is knocked unconscious. The intruder escapes into the night. Blake and Mortimer then discover a listening device hidden in their living room.

Later that day Blake receives an anonymous letter, requesting that he come to Dock if he wishes to learn more about the affair. Blake fears that it is a trap but elects to go anyway, with support from the police. After he has left Mortimer is visited by Stone, archivist at the "Daily Mail"; he has found a copy of "The Mega Wave". As he reads the book, Mortimer realises that Blake is in terrible danger. Mortimer joins then at Limehouse Dock where the Yellow "M" tries, unsuccessfully, to kill Blake. The police give chase but, despite being shot, falling into the river, crashing his car and catching fire, the Yellow "M" still manages to escape, apparently unharmed.

Mortimer stays on the Yellow "M"'s trail, following him into the sewers where he finds the Yellow "M"'s secret lair. There he finds Septimus, who is the mastermind behind the Yellow "M"; he has used the power of the Mega Wave (a special discovered by Septimus) to control his manservant, Pig, to be the Yellow "M". Pig turns out to be Blake and Mortimer's old adversary Olrik, who was found by Septimus after leaving the country after the libel case (Olrik was at the time nearly completely due to the events of ""). Septimus is seeking revenge on Macomber, Vernay and Calvin, who had ridiculed his concept of the Mega Wave. Septimus had written the book under a ) but his publisher has instigated, and lost, a libel action against Macomber and Vernay who were supported by Judge Calvin. Using the technology in his lair, Septimus jams the signal, announcing that the Yellow "M" will execute Mortimer.

Scotland Yard are able to triangulate the source of the signal and begin to search the area. Blake finds the copy of "The Mega Wave" Mortimer received from Stone; reading the dedication, he recognises Septimus' handwriting and realises Mortimer and the others must be in Septimus' house. Septimus is ready to kill Mortimer but Mortimer is able to break Septimus' hold over Olrik (by repeating the spell cast on Olrik that caused him to lose his memories). Olrik turns against his former master, killing him and then making his escape. Blake and the police enter the lair freeing Calvin, Vernay and Macomber and finding the stolen Imperial Crown. They finally head off to celebrate .

The drama takes place almost exclusively in with a brief flashback to and .

"The Yellow "M" was first published in English by Les Editions Blake and Mortimer in 1988. It was later issued by in January 2007.