Dee Jay (ディージェイ, Dī Jei?) is a character from Capcom's Street Fighter series of fighting games. He is a Jamaican kickboxer who also works as a recording artist and breakdancer. He wears boxing pants with the word "MAXIMUM" emblazoned on the sides (originally "MANTIS"), a word which was chosen specifically because all of its letters are symmetrical, and thus would still look correct when the sprite was flipped between facing right and left. He was designed by James Goddard, and is the only character at the time to be designed by an American. He was based on kickboxer Billy Blanks. His most recent appearance was in Super Street Fighter IV. In it, he is voiced by Kenji Hamada in the Japanese version and Chris Cain in the English version.

Dee Jay plays a minor role in Street Fighter II: The Animated Movie. Here, he beats up a few punks causing trouble at a nightclub before being warned by Guile and Chun-Li that he is being monitored by Shadaloo, which he does not believe until Chun-Li destroys one of their cyborgs in front of him. He was voiced by the late Ginzo Matsuo in Japanese and Beau Billingslea (credited as John Hammond) in English.

In the 1994 live-action film version of Street Fighter, Dee Jay was portrayed by Miguel A. Núñez, Jr. as one of the primary antagonists. He is depicted as a hacker and engineer working for General Bison. At the film's climax, Dee Jay plays the coward and flees from Bison's base with a trunk of Bison's money rather than stand and fight, but gets his comeuppance when he sees the trunk is full of the useless "Bison Dollars". This version of Dee Jay appears in the console version of the Street Fighter: The Movie game.

UDON's line of Street Fighter comics gives Dee Jay a minor role as a brainwashed agent of Shadaloo who breaks into MI5's Delta Red headquarters (along with other Doll agents) and frees a captured Doll agent from their custody. He's captured during the raid and his mind is restored with the help of Delta Red. 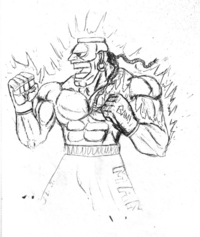 A sketch of Dee Jay drawn by James Goddard.

Dee Jay was conceived for Super Street Fighter II by American designer James Goddard, and is one of three characters in the series to have been conceived by an American, along with Blade and Captain Sawada. While Super Street Fighter II was going to feature Cammy, T. Hawk, and two brothers who had the same design save for a head swap,[3] Goddard felt that it would be redundant to have another pair of characters with the same fighting style. As a result, Capcom added Dee Jay in place of one of the brothers, while the other evolved into Fei-Long. The Japanese team asked Goddard for anymore ideas for Dee Jay, which Goddard replied by suggesting kickboxer Billy Blanks. He commented that "a really kick-ass black character would be awesome, instead of someone who was more negative, which is what you tended to see from the Japanese back in those days." In spite of the fact that Blanks is a bad guy in the film which he saw him in, The King of the Kickboxers, he states "his build and look, I just thought that it would make a great character --high-flying, crazy kicks... I mean, you have to remember, this was Billy Blanks pre-'Tae Bo.' He was so bad-ass." He began designing Dee Jay by drawing a sketch of him and sending it to the Japanese team. He sent the film The King of the Kickboxers[4] by copying a VHS tape and sending it through Fed Ex. He designed him as a "positive, fun character," implementing elements such as him being Jamaican, a "fun-loving guy," and a person who is trying to "jump-start his music career while kicking a lot of ass." While the design on his pants originally said "MANTIS," it was changed to say "MAXIMUM."[5] Lettering was previously used in the same way, with kickboxer Kwon, in the unofficial spinoff game Human Killing Machine.