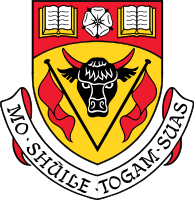 The University of Calgary is a research-intensive in , . The University is composed of 24,000 undergraduate and 5,500 graduate students.

The University of Calgary is one of the top research-intensive universities in Canada with seventh most . It is a member of the G13 (Group of Thirteen), , , and the . The university has a sponsored research revenue of $282 million, with total revenues exceeding $800 million. Being in Calgary, with Canada's highest concentration of engineers and geoscientists, both the Faculty of Science, Department of and the Schulich School of maintain ties to the petroleum and geoscience industry.Fact|date=July 2008

The university offers 150 programs in awarding bachelors, masters, and () degrees. The campus has an area of 2.13 km² and hosts 16 faculties, 55 departments and 36 research institutes and centers (see ). The teaching staff is 2,596. The university employs 2,777 management, professional and support staff. This puts the staff at 5,363, making it one of Calgary's four largest employers. The university has Alberta's toughest entry requirements, and due to the higher demand in post-secondary education, an acceptance rate of around 50%.Fact|date=April 2007

With the economic boom in Alberta, the government has promised $4.5 billion to post-secondary institutions in the province. [ [http://www.advancededucation.gov.ab.ca/news/2005/March/nr-Bill1.asp "Bill 1 to secure Albertan's access to the future"] ]

Several of the university's recognized faculties are the , the at , , a medical school (MD), a law school (), and in 2008, Western Canada's second school.

University of Calgary is a non-denominational institution established in 1966, when an existing college, the Calgary branch of the gained autonomy as a university.

a single, public provincial university created in 1906 was modelled on the American state university, with an emphasis on extension work and applied research. The governance was modelled on the provincial University of Toronto Act of 1906 which established a bicameral system of university government consisting of a senate (faculty), responsible for academic policy, and a board of governors (citizens) exercising exclusive control over financial policy and having formal authority in all other matters. The president, appointed by the board, was a link between the bodies to perform institutional leadership. In the early 20th century, professional education expanded beyond theology, law and medicine. Graduate training based on the German-inspired American model of specialized course work and the completion of a research thesis was introduced. The policy of university education initiated in the 1960s responded to population pressure and the belief that higher education was a key to social justice and economic productivity for individuals and for society. The University of Calgary launched its program in architecture in 1971. The University of Calgary has developed a wide range of undergraduate and graduate programs.

The ranks the school 166th in the world.

Calgary's Haskayne's School of Business is renowned for strengths in undergraduate business, although this is disputed, such as in Maclean Magazine's popular ranking system. In 2006, at the Inter-Collegiate Business Competition, hosted annually by Queen's University, Calgary continued to rank at the top in each area. Twenty-eight Canadian Undegraduate Business schools, with three from outside Canada, competed to solve business problems, and complete business cases. Calgary topped the rankings in business policy, debating, finance, labour arbitration, marketing and management information systems. It ranked third in accounting. Calgary came out the most successful school, one of four in the top 3 in more than one category (seven out of eight in Calgary's case). [ [http://www.icbconline.ca/competitors/events/winners.html "Inter-Collegiate Business Competition 2006 Rankings" ] ]

The University of Calgary ranks 10th in the medical-doctoral category of annual university rankings. However, the rankings have been met with criticism.

The University of Calgary and other universities have argued that Maclean's Magazine takes data out of context and is an inaccurate reflection of performance . In 2006, 21 Canadian universities along with the University of Calgary, many being part of the leading group of research universities known as the G13, opted out of the rankings. [ [http://gauntlet.ucalgary.ca/story/10276 U of C Gauntlet] - Opting out of Maclean's ranking] Other universities opting out in 2006 included Dalhousie, McMaster, Simon Fraser, Alberta, British Columbia, Lethbridge, Manitoba, Montreal, Ottawa, Carleton, Toronto and Queen's .

The university is home to MacEwan Hall Ballroom, a concert venue holding 1000. The Ballroom has been also been used for conferences, dinners, and political debates, recently the 2006 Alberta PC leadership debate.

The campus is home to the Black Lounge. Throughout most of the 1990s, the room was a music venue. Its capacity for live music is 350

The ice arena was site of the 1988 , the fastest ice in the world. It has a 400m track oval as well as a short track and two ice hockey rinks. The campus also has the Jack Simpson Gymnasium,three gymnasiums with bleachers that cover the outer two courts capable of seating 2,700 people. [ [http://www.kin.ucalgary.ca/2002/facilities/jack.asp Faculty of Kinesiology] ] The University campus also covers the , which is home to the Dinos Football Team and the .

The residence buildings on campus house 1800

A new building, "International House" houses 200 international students, instructors and conference attendees. This is part of the university's $1.5 billion capital program. With the completion of this new building the number of beds on campus will increase to 2000.

Through the university’s Native Ambassador Program Initiative, aboriginal students act as role models to younger students in their home communities. To assist with transition to a career, the university is leading an Aboriginal Lynx Career and Employment Project with other universities including and . [ [http://www.uwinnipeg.ca/index/cms-filesystem-action?file=pdfs/conferences/2007/aboriginal-rt-spring-report.pdf. The University of Winnipeg ] ]

has established a campus in Qatar which has mainly education as a Bachelor of Nursing and a Graduate Post Diploma in Nursing.

;1977
*, B.Sc. Inventor of the Java programming language, holds a Computer Science degree. [ [http://www.ucalgary.ca/news/uofcpublications/oncampus/weekly/nov3-06/comp-sci U of C On Campus article] ]

Histories of the University

* Geertje Boschma 'Faculty of Nursing on the Move: "Thirty Years of Nursing Education, Research and Science at the University of Calgary, 1969-2000" (Calgary: , September 30, 2005)