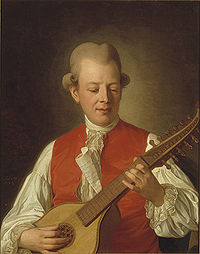 Carl Michael Bellman by Per Krafft

Carl Michael Bellman (help·info) (4 February 1740 – 11 February 1795) was a Swedish poet and composer. Bellman is a central figure in the Swedish song tradition and remains a very important influence in Swedish music, as well as in Scandinavian literature in general, to this day.

Bellman was born in Stockholm. His main works are the Songs of Fredman (Fredmans sånger) and the Epistles of Fredman (Fredmans epistlar), each including some 70 songs, many of which are about sociable drinking and/or designed for the occasion of the same. But this aspect of his songs is not the main reason he has become such an icon in the Scandinavian song tradition. A master of rhyme and rhythm, with a wonderful sense for combining words and music, he wrote songs that were innovative and original in form (parodying and refreshing contemporary literary styles was one of his specialities), as well as challenging in subject matter. On the surface, his songs centred to a large extent around themes like the joy of inebriation and the pursuit of sexual pleasure. Against this backdrop, however, he manages to elucidate the tender and fleeting themes of love, death, and the elusive qualities of the "present", the here-and-now, in a unique and moving manner. His songs reflect aspects of the life of the common man in 18th century Stockholm, but by his composition Gustafs skål, an informal royal anthem, he had also acquired the patronage of King Gustav III of Sweden. Some of the characters in his songs are the clockmaker Fredman, the prostitute Ulla Winblad, the ex-soldier, now alcoholic Mowitz and Fader Berg, a virtuoso on several instruments. Some of these were based on living models, some probably not. His songs often make references to Greek and Roman mythological characters such as the ferryman Charon and the God of wine and pleasure, Bacchus. 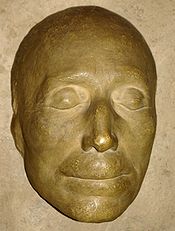 The Death Mask of Bellman

The songs of Bellman have been recorded by modern Swedish artists such as the late Cornelis Vreeswijk, Evert Taube, his son Sven-Bertil Taube, Fred Åkerström, rock musician Joakim Thåström, and even metal music bands as Candlemass or black metal band Marduk. They are also frequently used as choral music and as drinking songs. Important interpreters of Bellman's songs include Fred Åkerström and Cornelis Vreeswijk.

Bellman has been translated into English several times, most notably by Paul Britten Austin, and there have been many translations into German (by Hannes Wader and many others). Also the German Communist leader Karl Liebknecht liked to sing the songs of Bellman, but he was able to do so in Swedish. Hans Christian Andersen was one of the first to translate Bellman into Danish.

Bellman's life inspired the "Bellman joke", a type of joke told by Swedish children. These jokes appeared first in the 19th century. They have since evolved and the "Bellman jokes" of today have no connection to the poet. Usually they refer to Bellman as a lunatic acting in the extreme.