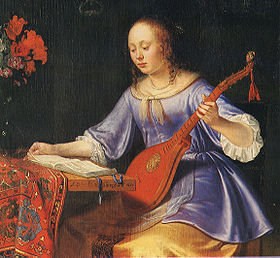 The cittern or cither (Fr. cistre, It. cetra, Ger. Cister, Sp. cistro, cedra, cítola) is a stringed instrument dating from the Renaissance. Modern scholars debate its exact history, but it is generally accepted that it is descended from the Medieval Citole, or Cytole. It looks much like the modern-day flat-back mandolin and the modern Irish bouzouki and cittern. Its flat-back design was simpler and cheaper to construct than the lute. It was also easier to play, smaller, less delicate and more portable. Played by all classes, the cittern was a premier instrument of casual music making much as is the guitar today.

A cittern, labeled cythara Italica et Germanica (to distinguish it from other instruments also referred to as cithara in the Latin of the era), from Kircher's Musurgia Universalis

The cittern is one of the few metal-strung instruments known from the Renaissance period. It generally has four courses (single, pairs or threes) of strings, one or more course being usually tuned in octaves, though instruments with more or fewer courses were made. The cittern may have a range of only an octave between its lowest and highest strings and employs a "re-entrant" tuning[1] - a tuning in which the string that is physically uppermost is not the lowest, as is also the case with the five-string banjo for example. The tuning and narrow range allow the player a number of simple chord shapes useful for both simple song accompaniment and dances, however much more complex music was written for it.[2] Its bright and cheerful timbre make it a valuable counterpoint to gut-strung instruments. The bandore (or bandora), an English bass instrument are forms of cittern. The Spanish bandurria, still used today, is a similar instrument. 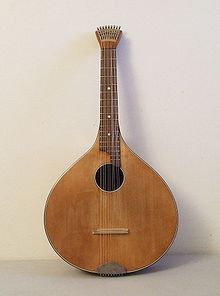 From the 16th until the 18th century the cittern was a common English barber shop instrument, kept in waiting areas for customers to entertain themselves and others with, and popular sheet music for the instrument was published to that end.[2] The top of the pegbox was often decorated with a small carved head, perhaps not always of great artistic merit; references exist in Shakespeare's Love's Labour Lost.

Just as the lute was enlarged and bass-extended to become the theorbo and chitarrone for continuo work, so the cittern was developed into the ceterone, with its extended neck and unstopped bass strings, though this was a much less common instrument.

In Germany the cittern survives under the names Waldzither and Lutherzither. The last name comes from the belief that Martin Luther played this instrument. Also, the names Thüringer Waldzither in Thüringer Wald, Harzzither in the Harz mountains, Halszither in German-speaking Switzerland are used.[3] There is a tendency in modern German to interchange the words for cittern and zither. The term waldzither came into use around 1900, in order to distinguish citterns from zithers.

A modern cittern made by Lawrence Nyberg of British Columbia, Canada 2003

The cittern family survives into the present day in the German 'waldzither', the Corsican Cetara, Spanish Bandurria and Laúd, as well as the Portuguese guitar, the descendant of English instruments brought into Portugal in the 18th century. The 'Guitarra Portuguesa' is typically used to play the popular traditional music known as Fado. Using the guitarra as a model, luthier Stefan Sobell singlehandedly brought the cittern back into existence in England[citation needed] as a popular new hybrid instrument primarily used for playing folk music, much as was its predecessor.

Sobell devised a pear-shaped, 8 or 10 stringed instrument influenced by the design of a Portuguese guitarra brought to him for repair by Irish musician Andy Irvine. He combined the ovoid body shape, unique neck assembly and double-course strings of the guitarra with the carved top, oval sound hole and radiused back of an early Martin C model archtop guitar to produce his modern cittern. After seeing pictures of Renaissance citterns and noting the resemblance to his design, he chose the name "cittern" to describe his new instruments. In a roundabout fashion, the English cittern came home by way of the its Portuguese descendant more than two hundred years after it left. For many, the rebirth of this instrument is represented by the 1983 release of the Green Linnet recording 'First Flight' by Gerald Trimble. Building on the innovations of Brian McNeill, Jamie McMenemy, and Pat Kilbride (The Battlefield Band), Trimble showcased his Sobell cittern as a solo and melody instrument.

Citterns and cittern research at the Musikinstrumenten-Museum der Universität Leipzig