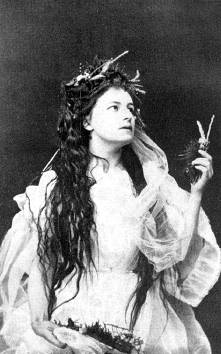 She was the mother of , and godmother to , son of (the elder Witkiewicz almost accompanied her and her family to in 1876).

Modjeska's father, Michał Opid, was a musician, and her tastes soon declared themselves strongly in favor of a dramatic career. In 1861 she married her guardian, Gustaw Modrzejewski, who helped her get started in the theater.

In 1868 Gustaw Modrzejewski died. Modrzejewska married Count Karol Bozenta Chłapowski, a politician and critic, and received an invitation to act at , in Russian , where she remained for seven years. She kept the normal, grammatically-feminine form of her first husband's . She would later, when acting abroad, use an "anglicized" version of her name ("Modjeska"), easier for English-speaking audiences to pronounce. [ [http://www.britannica.com/ebi/article-9330293 Encyclopedia - Britannica Online Encyclopedia ] at www.britannica.com] ).

In 1876 Modjeska emigrated to with her husband and son and several friends, including Julian Sypniewski and , future author of "". There they founded a n Polish colony on a ranch that Modjeska and her husband bought near Anaheim (future home of ).

It was in this period that Sienkiewicz wrote his "Charcoal Sketches" ("Szkice węglem"). The n experiment failed, the colonists went their separate ways, and Modrzejewska returned to the stage, reprising an roles that she had acted in Poland. Perhaps the best account of daily life on the ranch was 's memoir, "Life on the Modjeska Ranch in the Gay Nineties ".

In 1877 Modjeska appeared in in an English version of 's "" and also made her New York debut. Despite her imperfect command of English, she achieved remarkable success.

During her career she played nine an heroines, Marguerite Gautier in "", and 's "Maria Stuart". In 1883, the year she obtained American citizenship, she produced 's "" in , the first Ibsen play staged in the United States. In the 1880s and 1890s she had a reputation as the leading female interpreter of on the American stage.

In 1893 Modjeska was invited to speak to a women's conference at the Chicago World's Fair, and described the situation of Polish women in the n- and n-ruled parts of dismembered . This led to a Tsarist ban on her traveling in Russian territory.

On , , she gave a jubilee performance in . Then she toured for two years and ended her acting career, afterward only appearing sporadically in support of charitable causes.

Modjeska died at on , , aged 68, from undisclosed causes. Her remains were sent to Kraków to be buried in the family plot at the . A book by her, "Memories and Impressions of Helena Modjeska", appeared posthumously in 1910. A Polish translation ran that same year in the newspaper, "Czas" (Time). The last Polish edition of the book appeared in 1957.

Named for her are:
*
* (where Arden is located)
* (the north peak of ).
* Modjeskas, a -covered invented by in her honor when she visited .

Modrzejewska was also the Polish interpreter of the most prominent plays by , and fils, , , and .

's 1999 novel, "In America", won the in 2000. Although fiction, it is based on Modrzejewska's life story, including her 1876 emigration to , and her ascendance to American theatrical fame. Sontag was accused of plagarizing passages of her book. [Carvajal, Doreen (May 27, 2002) [http://partners.nytimes.com/library/books/052700sontag-america.html "So Whose Words Are They? Susan Sontag Creates a Stir."] "New York Times Book Review."]