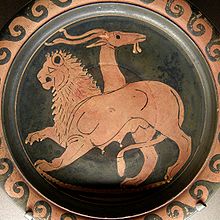 The Chimera on a red-figure Apulian plate, ca 350–340 BC (Musée du Louvre)
For other uses of the term "chimera," see Chimera (disambiguation).

The Chimera or Chimaera (

/kɨˈmɪərə/ or /kaɪˈmɪərə/; Greek: Χίμαιρα, Khimaira, from χίμαρος, khimaros, "she-goat") was, according to Greek mythology, a monstrous fire-breathing female creature of Lycia in Asia Minor, composed of the parts of multiple animals: upon the body of a lioness with a tail that ended in a snake's head, the head of a goat arose on her back at the center of her spine. The Chimera was one of the offspring of Typhon and Echidna and a sibling of such monsters as Cerberus and the Lernaean Hydra. The term chimera has also come to describe any mythical animal with parts taken from various animals and, more generally, an impossible or foolish fantasy.

Homer's brief description in the Iliad[1] is the earliest surviving literary reference: "a thing of immortal make, not human, lion-fronted and snake behind, a goat in the middle,[2] and snorting out the breath of the terrible flame of bright fire".[3] Elsewhere in the Iliad, Homer attributes the rearing of Chimaera to Amisodorus.[4] Hesiod's Theogony follows the Homeric description: he makes the Chimera the issue of Echidna: "She was the mother of Chimaera who breathed raging fire, a creature fearful, great, swift-footed and strong, who had three heads, one of a grim-eyed lion; in her hinderpart, a dragon; and in her middle, a goat, breathing forth a fearful blast of blazing fire. Her did Pegasus and noble Bellerophon slay"[5] The author of the Bibliotheca concurs:[6] descriptions agree that she breathed fire. The Chimera is generally considered to have been female (see the quotation from Hesiod above) despite the mane adorning its lion's head, the inclusion of a close mane often was depicted on lionesses, but the ears always were visible (that does not occur with depictions of male lions). Sighting the Chimera was an omen of storms, shipwrecks, and natural disasters (particularly volcanoes).[7] 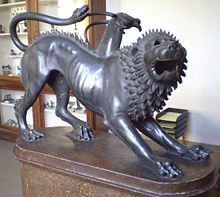 "Chimera of Arezzo": an Etruscan bronze

While there are different genealogies, in one version the Chimera mated with her brother Orthrus and mothered the Sphinx and the Nemean lion (others have Orthrus and their mother, Echidna, mating; most attribute all to Typhon and Echidna).

The Chimera finally was defeated by Bellerophon, with the help of Pegasus, at the command of King Iobates of Lycia. Since Pegasus could fly, Bellerophon shot the Chimera from the air, safe from her heads and breath.[8] A scholiast to Homer adds that he finished her off by equipping his spear with a lump of lead that melted when exposed to the Chimera's fiery breath and consequently killed her, an image drawn from metalworking.[9] 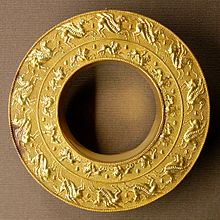 The Chimera was situated in foreign Lycia,[10] but her representation in the arts was wholly Greek.[11] An autonomous tradition, one that did not rely on the written word, was represented in the visual repertory of the Greek vase-painters. The Chimera first appears at an early stage in the proto-Corinthian pottery-painters' repertory, providing some of the earliest identifiable mythological scenes that can be recognized in Greek art. The Corinthian type is fixed, after some early hesitation, in the 670s BC; the variations in the pictorial representations suggest to Marilyn Low Schmitt[12] a multiple origin. The fascination with the monstrous devolved by the end of the seventh century into a decorative Chimera-motif in Corinth,[13] while the motif of Bellerophon on Pegasus took on a separate existence alone. A separate Attic tradition, where the goats breathe fire and the animal's rear is serpent-like, begins with such confidence that Marilyn Low Schmitt[14] is convinced there must be unrecognized earlier local prototypes. Two vase-painters employed the motif so consistently they are given the pseudonyms the Bellerophon Painter and the Chimaera Painter. A fire-breathing lioness was one of the earliest of solar and war deities in Ancient Egypt (representations from 3000 years prior to the Greek) and influences are feasible.

Robert Graves suggests,[15] "The Chimera was, apparently, a calendar-symbol of the tripartite year, of which the seasonal emblems were lion, goat, and serpent."

In Medieval art, though the Chimera of Antiquity was forgotten, chimerical figures appear as embodiments of the deceptive, even Satanic forces of raw nature. Provided with a human face and a scaly tail, as in Dante's vision of Geryon in Inferno xvii.7–17, 25–27, hybrid monsters, more akin to the Manticore of Pliny's Natural History (viii.90), provided iconic representations of hypocrisy and fraud well into the seventeenth century, through an emblemmatic representation in Cesare Ripa's Iconologia.[16]

Virgil, in the Aeneid (book 5) employs Chimaera for the name of Gyas' gigantic ship in the ship-race, with possible allegorical significance in contemporary Roman politics.[17] 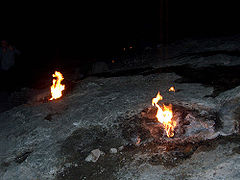 The eternal fires of Chimera in Lycia where the myth takes place
Main article: Mount Chimaera

Pliny the Elder cited Ctesias and quoted Photius identifying the Chimaera with an area of permanent gas vents which still can be found today by hikers on the Lycian Way in southwest Turkey. Called in Turkish Yanartaş (flaming rock), it consists of some two dozen vents in the ground, grouped in two patches on the hillside above the Temple of Hephaestus about 3 km north of Çıralı, near ancient Olympos, in Lycia. The vents emit burning methane thought to be of metamorphic origin, which in ancient times were landmarks by which sailors could navigate.

The Neo-Hittite Chimera from Carchemish, dated to 850–750 BC, which is now housed in the Museum of Anatolian Civilizations[18] no doubt served as a basis for the Greek legend. It differs from the Greek version in that while there are three heads, none of them is that of a goat, only a main human head, a lion's head facing forward and placed on the chest of the lion's body, and a snake's head placed at the end of the tail.

Use for Chinese mythological creatures

Some western scholars of Chinese art, starting with Victor Segalen, use the word "chimera" generically to refer to winged quadrupeds, such as bixie, and tianlu, and even qilin,[19]