Infobox Writer
name = Will Self 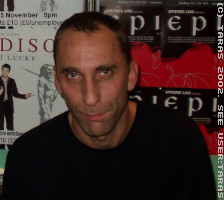 William Self (born , ) is an English , and . He received his education at the independent , and . He is married to journalist .

Self is known for his , and fantastical novels and set in seemingly parallel universes.

Will Self was raised, in his words, in "an effortlessly dull" North London suburb by"intellectually snobbish parents". Self's father was a professor in Political Sciences at the , and his mother who was a Jewish-American émigré. Self is , albeit not practising. [ [http://www.newstatesman.com/200107090044 New Statesman 9 July 2001] ] Despite the intellectual encouragement given by his parents, Self was an emotionally confused and self-destructive child, harming himself with cigarette ends and knives before getting into drugs in his teenage years. [ [http://72.166.46.24/archive/features/00/11/09/WILL_SELF1.html "Living Will"] ] As mentioned on an episode of "", he attended with where they played Rugby together.

Self was a voracious reader from a young age. At ten an interest into science fiction grew, with notable works such as 's "", and reflecting the precociousness of Self's reading. Into his teenage years, Self claimed to have been "overawed by the canon", stifling his ability to express himself. Nevertheless, Self's dabbling with illegal drugs grew analogous to his vehement reading. By nine he had a taste for alcohol, at thirteen he was smoking marijuana. By the time Self was eighteen his tastes had extended into the realm of heroin. However, Self still won a place at Exeter College, Oxford where he read philosophy.

His reasons for not studying English, as one may assume, were covered by Self in an interview with the Guardian.

"I [had] a pretty thorough grounding in the canon, but I certainly didn't want to be involved with criticism. Even then it seemed inimical to what it was to be a writer, which is what I really wanted to be."

Self was addicted to in the past, but has abstained from all drugs except and since 1998.

He currently lives in , ,

Self has been twice married. He was married to Katherine (Kate) Sylvia Chancellor, from 1989 to 1997. Kate is a daughter of John Chancellor [John Chancellor, who is not the late English artist (1925-1984) nor the American broadcast journalist, is the elder son of the late Sir Christopher Chancellor (1904-1989)] ] by his first wife Hon. (Mary) Alice Joliffe (herself daughter of and a great-granddaughter of , British Prime Minister in the early 20th century). Kate is also the older sister of actress , and the niece of journalist . They have two children, a son Alexis and a daughter Madeline. [ Burke's Peerage entry for Paget. Bt., of Cranmore. One [http://www.nndb.com/people/933/000140513/ database entry] , which provides the names of his wives and marriage dates, also says that his sons Alexis and Luther are by his first wife Katherine Sylvia Chancellor, and his youngest son Ivan and a daughter are by his second and present wife Deborah Orr] . "This contradicts the statement in the article above."] . (Katherine is now married to chef Rowley Leigh)

Will Self has made several appearances on British television, notably as a contestant on "" (as of 2007 he has made nine guest appearances, a record for people who haven't been host of the show), as a regular on "" and "Grumpy Old Men", a guest appearance on "" and a full episode of "Room 101". He gained a degree of infamy in 1997 when he was sent by the British "" to cover the electoral campaign of , and was subsequently fired from the newspaper after taking on the Prime Minister's jet.

His column appears in the magazine section of the Saturday edition of "". He has also written for the "" and "Prospect" magazine.

Like , Will Self loads his fiction with references and allusions to modern culture (both high and low)Fact|date=June 2007. The influences on his fiction mentioned most frequently include , and often not for purely literary reasons. Alongside these he has citedFact|date=June 2007 such diverse writers as , , , , and as formative influences on his writing style. is often mentioned alongside Self; Self went to interview him but they ended up having more of a discussion about each other's work and lives &mdash; it is known that they have tremendous respect for each other.

is a recurring character in the fiction of Will Self, appearing in the short story collections "The Quantity Theory of Insanity", "Grey Area", "Dr. Mukti and Other Tales of Woe", as well as in the novels "Great Apes" and "The Book of Dave". Busner is a psychiatrist and psychoanalyst practicing in London, and is prone to self-promotion at the expense of his patients. He is often the of the stories he appears in, although not always with villainous intent.

Self's works are additionally notable for their linguistic sophistication - specifically their enormous and erudite vocabulary.

*"" (1992) &mdash; the stories of a man and a woman who develop sexual organs of the opposite sex.
*"" (1993) &mdash; a lonely boy grows up just outside in a caravan park with his over-sexual mother and Mr Broadhurst who takes the boy on a disturbing and often violent journey.
*"Great Apes" (1997) &mdash; a man wakes up in a world where s evolved to be the species with self-awareness, while humans are the equivalent of chimps in our world.
*"" (2000) &mdash; an old lady dies, only to be moved to a suburb where the dead have taken residence.
*"" (2002) &mdash; a modern take on 's "".
*"" (2006) &mdash; Set between 1987 and 2003, against a backdrop of Fathers for Justice protests, it is the story of a London cab driver who suffers a mental breakdown due to failed relationships, estrangement from his son and an obsession with . He writes a book of rantings which he buries, that is discovered 500 years later and used as the sacred text for a religion that has taken hold in the flooded remnants of London.
*"" (2008) &mdash; a man flicks a cigarette butt from the balcony of his apartment while on vacation in a foreign land and soon finds himself enmeshed in the bureaucratic nightmare of native law.

*1991: Geoffrey Faber Memorial Prize for "The Quantity Theory of Insanity"
*1998: from for "Tough Tough Toys for Tough Tough Boys"
*2008: for Comic Fiction for "The Butt"

"I want to be misunderstood. And the other thing that amuses me is: I don't particularly want to be liked. Nobody goes into the business of writing satire to be liked. Whether I am or am not a nice bloke is neither here nor there. It's not part of the task I've set myself in my art."