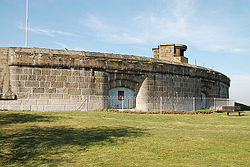 Coalhouse Fort is a large casemated fort in East Tilbury, near the modern town of Tilbury, in Thurrock, Essex, 2.3 miles (3.7 km) downstream from Tilbury Fort. It contains a museum of memorabilia from World War I and II.

History of the fort

Coalhouse Point was the site of an artillery battery, although nothing survives of this building.[1] The fort was rebuilt in the 1860s following recommendations by the Royal Commission on the Defence of the United Kingdom as a coastal defence and was completed in 1874. The fort was built on low lying land in a curve of the river Thames at East Tilbury and was positioned there to form a "triangle of fire" between Coalhouse Fort on the Essex bank of the river and Cliffe Fort and Shornmead Fort on the Kent bank.[2] It continued to serve as a defence to the capital through two world wars and was eventually bought by Thurrock Council in 1962.

During World War Two, rooms in Coalhouse Fort were equipped with instruments used to monitor the magnetic field of ships as they left the docks at Tilbury. This monitoring was to confirm the effectiveness of the individual vessel's degaussing equipment. Degaussing is a process whereby the naturally occurring magnetic field of a steel hulled ship could be neutralised by fitting electrical cables around the hull and passing an electric current through them. The neutralisation of the magnetic field was used as a countermeasure against magnetic mines, which as the name suggests, are triggered by the magnetic field of a ship's hull passing over them. The monitoring station was staffed by Wrens (Women's Royal Naval Service) working with civilian technicians. Cables were laid on the river bed and as ships passed over them, the magnetic field could be measured and (if necessary) adjustments made to the ship's equipment. The fort communicated with the ships by flags, Aldis lamp and in some cases by launch if the ship failed to stop. The Wrens and the technical staff were under strict orders not to discuss their work as degaussing was highly secret.[2]

When completed in 1874, a single tier of armoured casemates and an open battery housed 20 rifled muzzle loading guns of 9, 11 and 12.5 inch calibre. By 1906, these were obsolete and were replaced by breech loading 6 inch and 12 pounder quick firing guns. These served through World War I but were all removed by the 1930s. In May 1940, the 5.5 inch guns were removed from HMS Hood in a refit. A pair of these were installed in specially built casemates on the roof of the fort.[3]

The fort and nearby buildings

Coalhouse Fort itself is partly surrounded by a water filled "wet ditch" (not moat) and a dry ditch as part of the defences from the Victorian period. Apart from wells and a water storage cistern, there are no underground structures at Coalhouse, (although there are tunnels running beneath it within its perimeter wall). As the fort is built on marshland, any excavations would be likely to fill with water.

Due south from the fort and close to the river is the remains of a quick firing battery.[4] This was constructed in the early part of the twentieth century and originally equipped with 12 pounder artillery pieces. Further on down the river, at some distance from the fort, there are a number of defensive works. On the river foreshore about half a mile from the fort stands the remains of an early radar tower.[2] This tower was constructed during World War II and was one of the earliest examples of its type. Because of the secrecy surrounding radar during World War II this structure was marked on maps as a 'water tower' to confuse the enemy and this 'decoy' name has been continued on maps up until recently.

In 1949, the fort was leased to the Bata Shoe Company for storage and was purchased from the government in 1962 by Thurrock Council.[2] The surrounding land was cleared and turned into a public park but the fort was kept closed.

As part of the Tilbury Riverside project, a pathway has been developed between Coalhouse and Tilbury Fort passing along the river bank and past Tilbury Power Station. This is known as the Two Forts Way. The path is just over three miles and is described as "a challenging route suitable for able bodied walkers and experienced cyclists."[5]

In 1983 the fort was leased to voluntary group the Coalhouse Fort Project which aims to save the building from dereliction.[6] Currently the Project is applying for various grants. More money for the fort will also mean it is able to stay open longer. The ultimate goal for the project is to restore the building as close as possible to its original condition.

Currently the fort is open for 18 days during the year but special group visits can be arranged. The fort holds a series of open days throughout the year and also has special events for Hallowe'en and Christmas.

During its recent history the fort has been used as a location for TV programmes and films. These include the external shots of the prison at the beginning of Batman Begins.

In 2007, a grant was given to Coalhouse Fort by English Heritage and Thurrock Borough Council amounting to £125,000 to redevelop the gatehouse. The Projects plans for this block range from an interpretation room to a small shop. Work began on restoration in early 2009.[7]

In June 2011, two interactive trails were launched as an iPhone app known as Thurrock Mobile Explorer. These describe two routes around the park and provide information about the history and environment at numbered points.[8]

The fort was featured in a double episode of the 10th series of Most Haunted - a TV show which the UK TV regulator, Ofcom, has ruled is "an entertainment show, not a legitimate investigation into the paranormal". [9] The ruling also said that viewers of the show were not in full possession of the facts.