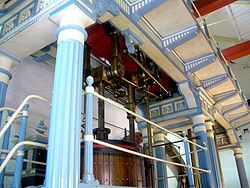 The Markfield Beam Engine is a 100 horsepower beam pumping engine, built in 1886 to transfer sewage from the Middlesex district of Tottenham into the London system for treatment at the Beckton works.

The engine is housed in a Grade II listed building, "Engine House No. 2", and, having been restored to working order, the engine is the main feature of Markfield Museum.

The museum is sited on the northern edge of Markfield Park, a large public open space.

The Tottenham and Wood Green sewage treatment works and pumping station was opened in 1864[citation needed].

The Markfield Beam Engine itself was built between 1886 and 1888. It was commissioned on the 12th July 1888 and saw continuous duty from that time until late in 1905, when it was relegated to standby duty for stormwater pumping. 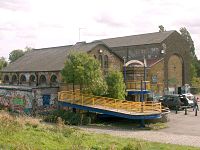 By the late 1950s it was decided that the site was too small to have a digested sludge system installed and that the treatment charges levied by the London County Council meant that it was more cost-effective to have all effluents directed through a new low-level sewer to the rebuilt Deephams Sewage Treatment Works at Edmonton. Thus pumping of sewage would no longer be required at the Markfield Works.

In 1964, after more than one hundred years of operation, all the incoming sewers were diverted to the extended East Middlesex Works at Deephams.

The former sludge tanks were turned into a communal garden space, however due to neglect and poor security, the entire area was extensively vandalised and allowed to become overgrown.

A full restoration of the entire park was completed by April 2010 and the park and museum and beam engine re-opened for public access.

The beam engine is a free-standing engine of the compound rotative type. It is believed to be the last engine produced by Wood Bros. of Sowerby Bridge, Yorkshire. It is the only surviving eight-column engine in its original location. The engine has two cylinders arranged to be double-acting and compounded.

The engine's beam drives two pumps of the single-acting plunger type. Each pump is 26" diameter and 51" stroke. At a working speed of 16rpm, these pumps could handle 4 million gallons in 24 hours over a relatively low head. The engine's flywheel is 27 feet in diameter and weighs around 17 tons.

The engine features a speed governor of the Watt Centrifugal type and its drive coupling to the cylinders is of the conventional Watt parallel motion Linkage.

The engine is finely decorated, according to the fashion of the day, with doric columns and acanthus leaves. There are also three finely ornate iron vases atop the valve chest. Its original colours, it is believed, were light and dark green with all exposed metalwork being highly polished and oiled.

Since the engine was mothballed in February 1964, and the surrounding site was levelled, the area had seen significant decay and vandalism. It was estimated that a complete restoration of the engine would cost an additional £25,000.

The engine was partially restored and painted to a moving condition. A steam generator was fitted in a new boiler house annexe in the early 1980s but later broke down.

By April 2010 a complete overhaul and restoration had been completed. 2 new oil fired boilers were installed and a seized pump fixed to bring the engine to running condition. September 2009 saw the first public steaming of the engine in the restored engine house.

Whereas the 1980s partial restoration had seen a blue and white colour scheme employed this has now been changed to a more original dark green.

Several minor additions to the engine were removed to more accurately reflect its working life condition.

Haringey Council planned a major project to regenerate Markfield Park. A key part of the £1.5 million project was the restoration of the beam engine to full working order, and the development of the museum to provide better educational facilities for the area. An initial £22900 was awarded to the council by the Heritage Lottery Fund in May 2007, for the purposes of developing detailed plans for Stage 2 of the application for the remainder of the funding.[1][2] The restoration included the replacement of all the pumphouse windows, which were bricked-up since 1964 in an effort to secure the beam engine from vandalism. (Plans showing the new museum complex may be found on the Official Website.)