The Great Crested Newt, also called Northern Crested Newt or Warty Newt (Triturus cristatus) is a newt in the family Salamandridae, found across Europe and parts of Asia.

The range of the Great Crested Newt extends from Great Britain and Brittany in the west across much of Europe north of the Alps and the Black Sea. It is the biggest and least common of the three newts found in the British Isles and is one of only four amphibians which are protected by the UK Biodiversity Action Plan.

Since the 1940s, populations of Great Crested Newts have declined in most of Europe due to loss of habitat.[2] In England, Wales and Scotland, it is a protected species under Schedule 5 of the Wildlife and Countryside Act 1981, and under equivalent legislation in Northern Ireland. It is also a European Protected Species and as such it has additional protection in the UK under Regulation 39 of the Conservation (Natural Habitats etc.) Regulations 1994 (the Habitats Regulations), as amended by the Conservation (Natural Habitats, &c.) (Amendment) Regulations 2007. It is an offence to:

Other EU countries have similar legislation, implementing the Habitats Directive.

In the United Kingdom, habitat of the Great Crested Newt has diminished due to land development pressure from population growth and agricultural expansion; for example, it is considered eliminated from its prior range at the Portlethen Moss Nature Reserve in Scotland.[citation needed] 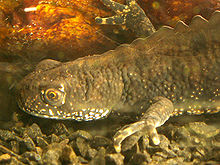 Great Crested Newts have dark grey-brown backs and flanks, and are covered with darker coloured spots so that they appear almost black in colour. Their undersides are either yellow or orange-coloured and are covered in large black blotches, which have a unique pattern in each individual.

Males can be distinguished from females by the presence of a jagged crest during the breeding season. This runs along their backs, then a separate smoother-edged crest runs above and below the tail (in some other species of newts the crest along the back is continuous with the tail crest). They also have a silver-grey stripe that runs along the tail.

Great Crested Newts normally live on land but breed in ponds and pools. Breeding is similar to that of other newts. After performing a courtship display, the male deposits a spermataphore (a small packet of sperm) from his cloaca (reproductive and excretory opening) in the path of the female. He then moves sideways in front of her to gently encourage her into a position where the spermataphore will be pressed against and picked up by her cloaca - so "mating" is done without direct contact. The female lays two or three eggs a day between March and mid July, until 200 to 300 eggs have been laid. The eggs are laid on submerged aquatic plants, each carefully wrapped in a leaf.

The larvae (or efts) hatch after about three weeks and then live in the pond as aquatic predators. They are vulnerable to fish predation, and water bodies containing fish are rarely used for breeding (this means that they do not usually use running water, larger lakes nor many garden ponds).

After metamorphosis into air-breathing juveniles at about four months old, they live a terrestrial life until old enough to breed, which is at about two or three years of age. They may disperse at this age as far as 800 metres (about half a mile).

Both the juvenile newts and the adults (outside the breeding season) live in terrestrial habitats with dense cover, such as scrub, rough grass and woodland, usually within about 200 metres of the breeding pond. They rest during the day beneath rocks, logs or other shelter.

During the winter months they hibernate under logs and stones or in the mud at the bottom of their breeding ponds.[5] The newts normally return to the same breeding site each year, and can live as much as 27 years, although up to about 10 years is more usual.