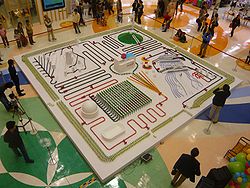 The domino effect is a chain reaction that occurs when a small change causes a similar change nearby, which then will cause another similar change, and so on in linear sequence. The term is best known as a mechanical effect, and is used as an analogy to a falling row of dominoes. It typically refers to a linked sequence of events where the time between successive events is relatively small. It can be used literally (an observed series of actual collisions) or metaphorically (causal linkages within systems such as global finance or politics).

Demonstrations of the effect

The classic demonstration involves setting up a chain of dominoes stood on end, and toppling the first domino. That domino topples the one next to it, and so on. In theory, however long the chain the dominoes will still fall. This is because the energy required to topple each domino is less than the energy transferred by each impact, so the chain is self-sustaining. Energy is stored by setting each domino in the metastable upright position, and that energy is what keeps the chain toppling. The mechanics of domino toppling is described by W. J. Stronge as a system with two attractors. Two theories are described: independent action and successive destabilization by cooperative neighbors.

Often Rube Goldberg machines will involve a complicated chain of reactions succeeding each other in a domino fashion.