Concrete ships are ships built of steel and ferrocement (reinforced concrete) instead of more traditional materials, such as steel or wood. The advantage of ferrocement construction is that materials are cheap and readily available, while the disadvantages are that construction labor costs are high, as are operating costs. (Ferrocement ships require thick hulls, which means extra mass to push and less space for cargo.) During the late 19th century, there were concrete river barges in Europe, and during both World War I and World War II, steel shortages led the US military to order the construction of small fleets of ocean-going concrete ships, the largest of which was the SS Selma.[1] Few concrete ships were completed in time to see wartime service during World War I, but during 1944 and 1945, concrete ships and barges were used to support U.S. and British invasions in Europe and the Pacific. Since the late 1930s, there have also been ferrocement pleasure boats. 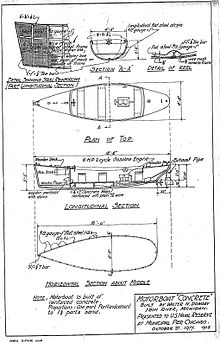 Blueprints for a concrete boat. 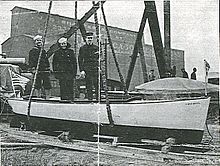 Concrete boat constructed by Walter Dowsey hauled out in Chicago.

The oldest known ferrocement watercraft was a dinghy built by Joseph-Louis Lambot in Southern France in 1848. Lambot's boat was featured in the Exposition Universelle held in Paris in 1855.

Beginning in the 1860s, ferrocement barges were built in Europe for use on canals, and around 1896, an Italian engineer, Carlo Gabellini, began building small ships out of ferrocement. The most famous of his ships was the Liguria.[2]

Between 1908 and 1914, larger ferrocement barges began to be made in Germany, United Kingdom,[3] the Netherlands, Norway, and California.[4] The remains of a British ship of this type, the auxiliary coaster Violette (built 1919), can be seen at Hoo, Kent, England.[5]

On August 2, 1917, Nicolay Fougner of Norway launched the first self-propelled ferrocement ship intended for ocean travel. This was an 84-foot vessel of 400 tons named Namsenfjord. With the success of this ship, additional ferrocement vessels were ordered, and in October 1917, the U.S. government invited Fougner to head a study into the feasibility of building ferrocement ships in the United States.[6][7]

About the same time, the California businessman W. Leslie Comyn took the initiative to build ferrocement ships on his own. He formed the San Francisco Ship Building Company (in Oakland, California), and hired Alan Macdonald and Victor Poss to design the first American ferrocement ship, a 6,125-ton steamer named the SS Faith. Faith was launched March 18, 1918. She cost $750,000 to build. She was used to carry bulk cargo for trade until 1921, when she was sold and scrapped as a breakwater in Cuba.[2]

On April 12, 1918, President Woodrow Wilson approved the Emergency Fleet Corporation program which oversaw the construction of 24 ferrocement ships for the war. However, when the war ended in November 1918, only 12 ferrocement ships were under construction and none of them had been completed. These 12 ships were eventually completed, but soon sold to private companies who used them for light-trading, storage, and scrap.[2]

Other countries that looked into ferrocement ship construction during this period included Canada, Denmark, Italy, Spain, Sweden[4] and the United Kingdom.

Between the world wars, there was little commercial or military interest in concrete ship construction. The reason was that other shipbuilding methods were cheaper and less labor intensive, and other kinds of ships were cheaper to operate. However, in 1942, after the U.S. entered World War II, the U.S. military found that its contractors had steel shortages. Consequently, the U.S. government contracted McCloskey & Company[8] of Philadelphia, Pennsylvania to build 24 self-propelled concrete ships. Construction started in July 1943. The shipyard was at Hookers Point in Tampa, Florida, and at its peak, it employed 6,000 workers.[9] The U.S. government also contracted with two companies in California for the construction of concrete barge ships.[9] Barge ships were large vessels that lacked engines to propel them. Instead, they were towed by tugs.

In Europe, ferro cement barges (FCBs) played a crucial role in World War II operations, particularly in the D-Day Normandy landings, where they were used as part of the Mulberry harbour defenses, for fuel and munitions transportation, and as floating pontoons. Some were fitted with engines and used as mobile canteens and troop carriers. Some of these vessels survive as abandoned wrecks in the Thames Estuary; two remain in civil use as moorings at Westminster. One notable wartime FCB, previously beached at Canvey Island, was destroyed by vandals on May 22, 2003.[10] Several FCBs remain beached on the banks of the River Severn at Purton in Gloucestershire.[11]

In 1944 a concrete firm in California purposed a submarine shaped freighter which they claimed could achieve speeds of 75 knots. The war ended any more research into the project. Many believe anyway that the claims were way over stated.[12]

One concrete barge under tow by USS Jicarilla (ATF-104) was lost off Saipan during a typhoon, and another knocked out a light house in Brisbane[14] but the rest served admirably.[15] 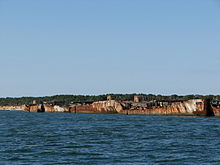 Surviving concrete ships are no longer in use as ships. Several live on in various forms, mostly as museums or breakwaters. For example, SS San Pasqual, a former oil tanker, lies off the coast of Cayo Las Brujas, Cuba, where it served as a hotel, then as a base for divers. Currently, the San Pasqual is abandoned.[16]

The wreckage of SS Atlantus (commissioned in 1919, sunk in 1926), is visible off Cape May, New Jersey.[16] The tanker SS Selma,29°20′40″N 94°47′10″W﻿ / ﻿29.34444°N 94.78611°W﻿ / 29.34444; -94.78611 is located northwest of the fishing pier at Seawolf Park in Galveston. The ship was launched the same day Germany signed the Treaty of Versailles, ending the war, so it never saw wartime duty and instead was used as an oil tanker in the Gulf of Mexico.[1] One of the few ships used in World War I, the SS Creteboom, lies abandoned in the River Moy, just outside the town of Ballina, County Mayo, Ireland and is considered of much interest to the area's many tourists. The largest collection, though, is doubtless at Powell River, British Columbia, where a lumber mill uses ten ships as a breakwater.[17] The SS Palo Alto, a concrete tanker that was launched May 29, 1919, was purchased and turned into an amusement pier, and is still visible at Seacliff State Beach, near Aptos, California.[16] The SS McKittrick, launched in 1921 in Wilmington, N.C. later became the SS Monte Carlo, a gaming ship off Coronado, California that ran aground on December 31, 1936. The wreck is peroidically exposed with strong storm tides.[18]

Modern hobbyists also build ferroboats.[19] The reason is that construction methods do not require special tools, and materials are comparatively cheap. A pioneer in this movement is Hartley Boats, which has been selling plans for concrete boats since 1938.[20] Meanwhile, since the 1960s, the American Society of Civil Engineers has sponsored the National Concrete Canoe Competition.[21]

In Europe, especially the Netherlands, concrete is still used to build some of the barges on which houseboats are built.[22]